The soulful life of a weaver at his loom inspired by the mournful sound of the spinning wheel to compose and sing tunes of lost sweethearts. Often the songs were mournful and full of intimacies that might have been. Sometimes they were of a love he won and held dear. William Bell was such a man
This is the earliest of my Bell ancestors that I have so far discovered. My path led back to the parish of Derryvullan, Drumbulkin Townland, Barony of Lurg, County Fermanagh.
Young William Bell resided there with his wife Flora and young son Hugh. I found them in the 1821 census.(1) William was a weaver and farmer.
They, (or he, his wife Flora and son Hugh) would soon leave their homeland and move to Canada. Here he would continue to work as a weaver and also as a market farmer. His son would follow in his footsteps.
Willam appears to have only one son who reached manhood. However, it has come to light there were possibly more children who died as infants. The births in Derryvullan while they lived there to parent William and Flora were as follows: Thomas, Hugh, William and Leah.(2) His son Hugh would survive to continue the Bell heritage that is dear to me.
I have not been able to find much more about William, from his homeland but in Canada I have been able to follow his descendants.
14 Feb 1808 Thomas to William Bell and Florence?
13 May 1810 Hugh to William and Flora
28 Mar 1813 William to William and Flora
12 Mar 1815 Leah to William and Flora

This would suggest that Hugh had one sister and possibly two brothers. The census of 1821 lists Hugh as the only child, indicating that the other children died. In this census William is 44 and Flora 40. My thoughts are that since only William and Hugh came to Canada that Flora died shortly after the 1821 census, possibly in childbirth along with the child.
Some other interesting facts are that there are many Bells in that area, a small community and probably all related. Sue Barbeau from another FB group posted that she is a DNA match to a William Bell son of James Bell (1774) from Fermanagh. This would indicate that James is possibly our William's brother.
Earlier in my post I mention another Hugh Bell as a possible name for the father of our William. Now I am not so sure. If the traditional patterns were followed then William's father's name would be Thomas, Flora's father would have been Hugh, and her mother would have been Leah. This appears to fit as William's third born son was named William.
The naming patterns give us clues to the names of family so my next task is to study the people from the 1821 Irish census for Fermanagh and see if through Hugh's children I can possibly come up with other ancestors and possibly Flora's maiden name. It is likely that she is from that same village, or one very nearby.
If anyone has any incite into this new information please let me know so we can continue the quest for our Bell heritage. The links below may be of some help.
Scots-Irish naming patterns:
Traditional Scottish naming Patterns and for girls:
Traditional Irish naming Patterns

*Perhaps if I can find someone to access these documents it will lead to parent of my 3X great-grandfather.

I did find a land owner by the name of Hugh Bell who lives in Maguiresbridge owning 75 acres of land. This land is only 5 miles from the town of Derryvulland, where William Bell and two other Bell's John and Robert all have received a premium for planting at least 1 acre of land or more entitling them to possibly 4 spinning wheels. Were John and or Robert brother's of William. Another possibility.
I am hoping to prove William's father was the Hugh Bell who owned this 75 acres mentioned below. So far that has not come to fruition. There have always been Williams, Roberts and Johns in the family of my Bells and at the beginning the name Hugh was prominent as well.

A List of Persons to whom Premiums for sowing Flax-seed in the year 1796 have been adjudged by the Trustees of the Linen Manufacture.
Entitlement: To the Person who should sow between the 12th Day of March and the 1st Day of June 1796, with a sufficient Quantity of good sound Flax-seed, any Quantity of Land, well prepared and fit for the purpose, not less than
1 Acre – 4 Spinning Wheels
3 Roods – 3 Ditto
1 Rood – 1 Ditto
And to the Person who should sow in like Manner any Quantity of like Land, not less than 5 Acres, a loom, or Wheels, Reels, or Hatchells to the Value of 50 Shillings, and for every 5 Acres over and above the first five a like Premium.
Derryvulland    Bell    John        1
Derryvulland    Bell    Robert    1
Derryvulland    Bell    William    1

* Is Catherine the mother of William? Is Hugh his father? A few clues but also a brick wall. One I will persist to break down.

An interesting aside is that while looking for the Townland in Ireland of Drumbulkin I came across the name Meadowvale which is the name in Ontario where Hugh’s children were born. Did many from this area in Fermanagh come to settle in Ontario and name the area for their lost homeland or did William (father of Hugh), himself name this area Meadowvale? The Irish town is only several minutes walk from the church of Ireland in Derryvullan.

I recently found a document that quite possibly proves William was inlisted in the military. The name ​Bell William appears in the Canada, British Regimental Registers of Service, 1756-1900 42nd Foot Soldiers, 1st Battalion 1814-1816. The William in this document is approximately the same age as our William, from Derryvullan and listed as a volunteer foot soldier. There appears to be a plethora of information on the document but it is very difficult to read.(6)

​​February 15, 1837 William Bell applied for a Land Petition for the West half of Lot 11, Concession 2 WHS, Toronto Township, County of Peel. At the time it was a Clergy Reserve leased to John Carter in 1821, with 45 cleared acres and rents paid by the petitioner.
William’s affidavit indicates he bought the lot from John Bell, who purchased it from Joseph Carter, the original occupant. William had cleared 45 acres, built a house, barn and other building on the lot.
​​​Included in the Land Petition application is a signed document from John Bell of the City of Toronto to indicate he sold this lot to William Bell for 10 pounds. Unfortunately, the document doesn’t indicate a date for this transaction, other than the date John Bell signed the document (Feb. 15, 1837). Who was John Bell from the City of Toronto Was he related to William?
​As seen in the transcribed document below William cleared the land and constructed buildings and makes his intent for ownership of the property.
​Letton has done an extensive search regarding the property.
Land Petition c-1632, Vol B20, Pet. 128 for William Bell
Page 1
Recd. 18th Feby 1837

To His Excellency Sir Francis Bond Head Knight Commander of the Royal Hanoverian Guelphic Order and the Pruseran Military Order of uent(sic) Lieutenant Governor of Upper Canada
The Petition of William Bell of the Township of Toronto, Yeoman Humbly showeth that Your Petitioner purchased from John Bell his Interest in the West half of Lot 11 in 2nd Con West of Hurontario in the township of Toronto a clergy reserve the said John Bell having purchased from Joseph Carter, the original occupant of the Lot.
The assignment from Joseph Carter was left in the office of the Secretary to the Clergy Corporation where it well now be found.
Your Petitioner has cleared about 40 acres on the Lot and built a House, Barn & other offices thereon. He is now desirous of purchasing from the Crown and humbly prays Your Excellency that the said half Lot may be sold him at a valuation
And Your Petitioner will ever pray.
For William Bell
James Henderson
City of Toronto
15th Feby 1837

Clergy Corporation Office
Toronto 24th February 1837
A lease of Lot No. 11 in the 2nd Con: WCRoad in Toronto, was Ordered to Joseph Carter in 1821 – but the Description did not issue, the rents have been seemly (sic) paid up by the Petitioner.
Signed J Barnes (sic)

B20 of No. 128
Petition of William Bell
Applying to purchase The West Half of Lot No. 11 in the 2nd Con:
West of Hurontario Street in the Township of Toronto a Clergy Reserve
Signed Geo Illegitable
18th Feby 1837
Informed (sic ) the Scy
of the Clergy Corporation
(rest is hard to read due to hand writing)
(SIC)
Toronto, 8th March 1837
W1/2 Lot 11 in 2 Conc WHS Toronto, a Clergy Reserve was inspected and valued in 1836 by H. Black DS at 3 of G per Acre and subsequently in the office by S.S. Wilnook at 25 per acre, the petitioner is returned as the occupant with 45 acres cleared, reward (sic) state the lot as being only 2 ½ Miles from Churchville village.
N.P. Salway
In Council 16th March 1837
Recommended at 27/6 per acre
N.P. Sullivan
Order moved to Commissioner
Of Crown Land 31st March 1837

Page 3
128b
Know all men by these Presents that I John Bell of the City of Toronto in the Home District and Province of Upper Canada, Labourer for and in consideration of the sum of Ten pounds of lawful money of Upper Canada to me in hand paid by William Bell of the Township of Toronto in the District and Province aforesaid Yeoman the receipt whereof I do hereby acknowledge have bargain and sold assigned released and for ever quit claimed unto the said William Bell all my Estate right title interest claim and demand whatsoever of mine to grant (sic) of that certain parcel of Land and premise situated and being in the Township of Toronto Being the West half of Lot Number Eleven in the Second Concession West of Hurontario Street in the said Township a Clergy Reserve together with all the appurtenances and hereditaments here to(sic) belonging or many(sic) wise(sic) appertaining. To have and hold the same unto the said William Bell his heirs and assigns forever.
In witness whereof I have (word sic) set my hand and seal this Fifteenth day of February in the year of our Lord on Thousand and eight hundred and thirty seven
Signed sealed and delivered in the presence of Signed John Bell with his mark
James Henderson
*Above thanks to the document transcription by CJ Letton 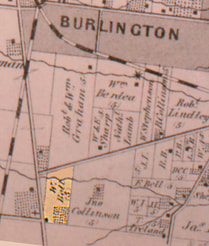 William Bell's lot indicated in orange
​         According to my research the family arrived in Canada sometime after the 1821 Irish census and the next one in 1831. I found another document that may or may not be the family (or part of).​(7) ​ If this is the William Bell family they would have come through the port in New York.
Hugh Bell’s lot (inherited from his father William), was the west half of Concession 2, Lot 11, Toronto Township (North of Dundas Street), Peel County. Hugh’s father William  (c. 1777 – 1839) occupied this lot prior to 1837 and had applied for the patent, but the patent wasn’t granted until 1851. About 1865 Hugh Bell sold his lot to Gooderham of Gooderham & Worts who were well known in the surrounding area (Toronto, York, Peel) operating a number of mills and other businesses. Gooderham & Worts took over an existing mill in Meadowvale Village, which was right in town. The McGill Digital County Atlas site this link should take you to the Gooderham property that belonged to Hugh Bell in the 1850s & first part of the 1860s. 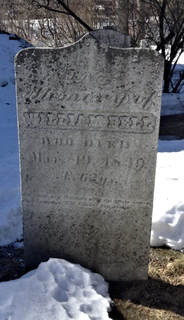