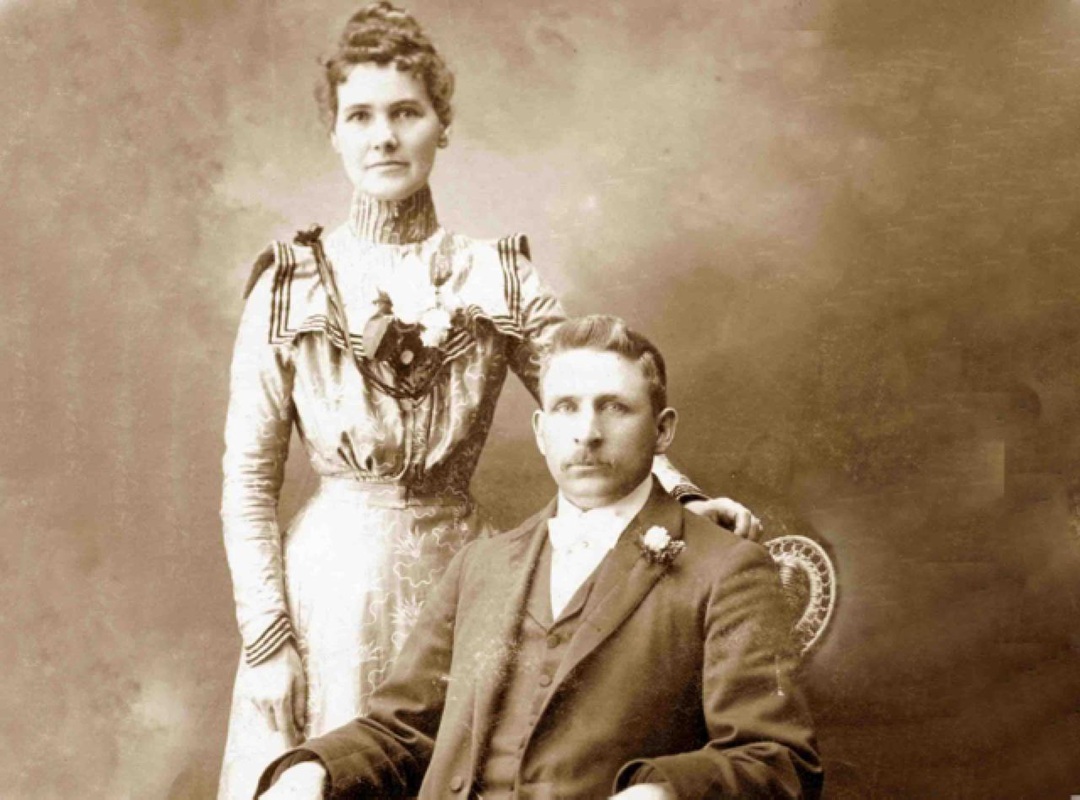 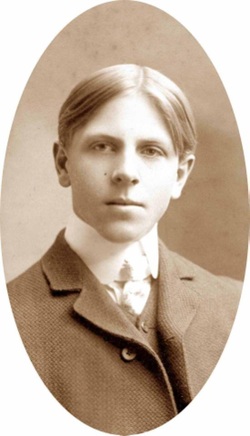 Frederick Earnest Ryder
Frederick Earnest Ryder, born May 20th 1877 to James and Frances Ryder in Acton, Ontario.
According to the local newspaper archives Fred, like his sisters and brothers was a good student. He also liked sports.
In 1891, when Fred was thirteen he was living with his mother, two younger brothers, four sisters and two aunts. The boys were certainly outnumbered. His mother and two aunts worked for the local tannery as glove makers.
An article in the local newspaper in December of 1897 mentioned that Fred had been promoted to a position on the road fro Messrs. W. H. Storey and Son. He was working in the east of the province the week the article was written. There was mention of Fred’s worth as an employee saying that he deserved the promotion.
1901 has Fred now aged twenty-three, working at the glove factory and earning a salary of $350 per year. He is the eldest of Frances children still living at home. Bertha has married and moved out to Manitoba.
Bertha came to visit the family in January of 1902 and when she arrived she had contacted smallpox. This she transmitted to Fred. Bothe Bertha and Fred recovered.
Fred married Alice B. Chisholm in September of 1902.

“A Pretty Home Wedding
A very happy and pretty wedding took place Tuesday last at the residence of Mr. and Mrs. John Chisholm, Mill Street, when their daughter Miss Alice, was united in marriage to Mr. Fred Ryder, now of Woodstock, but until last spring a resident of Acton.
The ceremony was performed by Rev. H. A. Macpherson in the presence of a number of relations and friends, the bridal couple standing under an arch of _______. The bride was very prettily gowned in white silk organdie: and wore the customary bridal veil decorated with orange blossoms, and carried a bouquet of white bridal roses. The brides-maid, Miss Bertha Chisholm, of Burlington, was similarly attired, carrying a bouquet of pink roses.
The groom was supported by his brother Mr. Edw. Ryder, of Acton. After the ceremony at 11:30 the guests taken to the dining room, which was tastefully decorated with flowers and ferns and when ample justice had been done to the tempting feast many were the congratulations showered upon the happy couple. The many beautiful presents testified to the sincere good wishes of the friends of the newly-married couple The bride’s going away gown was very becoming grey tailor-made, with blue silk waist. Amid showers of _____ good wishes and rice the united ones departed on the afternoon train for London, where after spending a few days they will go to their new home in Woodstock to take up the pleasures and duties of home life. 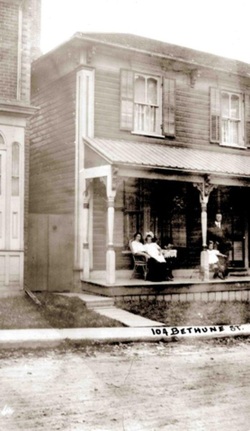 The Family on the porch of their home in Brockville, Ontario.
​
After the marriage and up until shortly before the death of his father-in-law,  Fred and Alice lived on her father's farm farm Lot 1 Concession 3 in Erin Township.
Fred continued as a travelling salesman for Storey and Son and settled in Brockville, Ontario. They lived at 104 Bethune in 1911 and by this time had their two girls ages seven and three. Fred is listed as a shipper for the Glove works, which kept him employed year round. He earned $800 per year to support the family.
Fred, like his brothers always had a keen interest in sports, particularily lacrosse and baseball. He at one time had been a coach and manager of a baseball team.
In 1921 Fred and Alice were living at 106 Bethune Street in Brockville and Fred earned $1000 per year at his trade. He and Alice had two girls. Audrey Blanche nineteen, and Edna Barbara thirteen. They were living in a wood frame house which they rented for $25 per month.
Audrey was working as a stenographer and Edna was a student. Alice was a homemaker.
The family were listed as Presbyterian. It appears that both Fred and his eldest daughter were employed by the Storey and Son Glove Company of Acton.
Fred died in Brockville August 28th 1953 at age seventy-six years of age.
When Fred died he had been a resident of Brockville for many years and considered it his home. He had retired from his job at the Storey Glove works and Wolthausen hat works in 1932, after working as a commercial traveller.  He was obliged to retire due to ill health.
Fred was a member of the First Presbyterian Church in Brockville, a member of Walker Lodge, in Acton, and at one time an active member of the Commercial Travellers’ Association and later  becoming an honorary member.
His wife Alice, two daughters, Audrey (Mrs. Harry Donovan) and Barbara, (Mrs. Charles Broadbent) and one grandson David Ernest Donovan were left to mourn his passing, along with one brother and two sisters. He was buried in the family plot in Oakland Cemetery in Brockville.
His wife Alice, lived another eleven years and died in Brockville, February 8th 1964 at almost nine-one years of age.
Powered by