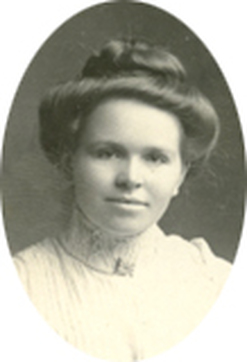 Ida May Ryder
Ida May Ryder, born on the 15th of February 1880 kept a special bond with her mother Frances. This is perhaps because she was the only one of Frances’ daughters not to move away from the area.
She was born in Petrolia, Ontario when her parents had moved there, but returned to Acton when she was seven years old.
As a young girl she attended the Presbyterian Church and attended school in Acton.
At age twenty-two she married William McKinney Cheyne, a local farmer. He was the son of Lancelot Walker Cheyne and his wife Hannah.
May and William would have five children during their marriage. Frances Wilma 1904, Lancelot 1907, Margaret (Maudie) in 1910, William 1917, and Eleanor date unknown,
My grandmother, Alice Maude, May’s younger sister would often go to the farm to visit May and her family. When she died, she continued to visit with her daughter Wilma.
May died December 22, 1937. She was only fifty-eight when she died. Her obituary noted that she was a highly respected citizen of Hillsburg, where she resided on the 3rd Line.
May continued to be a faithful member of the Presbyterian Church in Hillsburg when she married.
When she died the two youngest were still living at home. One of her daughters Willma, had married Charles Booth of Caledon, Maudie, would later marry Harry Churches of Guelph and Lancey remained in Hillsburg, living on the 3rd line near the family farm.
My father, Kelvin Bell and two other nephews carried the flowers behind the pallbearers. She was interred at Huxley Cemetery.
Her husband Will died in 1949 at age 74.