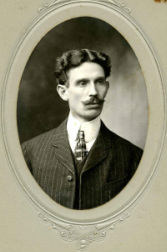 Robert John Bell was born in Ashgrove, Ontario March 6th 1873 son of William Bell and Jane McDowell. Jane died when Robert was just four years old, leaving his father with three young boys. In his birth registration he is registered as John.

His father remarried in 1879 but the second wife only lived one year. Robert is listed in the 1881 census with is father and two brothers William J. nine, and Nathaniel Cameron 6.

In 1883 his father remarried for a third time to a widow by the name of Catherine Thompson. This must have been quite an ordeal for the three young boys.

In the 1891 census he is listed as a cabinet maker, while both his father and older brother are farm labourers. Nathaniel the younger brother is a machinist.  John remained at home with his father and stepmother after the other two brothers were long gone and he helped on the farm. His oldest brother William had moved to Saskatchewan before 1900 had married a girl out west, and his younger brother Nathaniel was living in Georgetown and working as a machinist in 1901. Nathaniel married in 1902. 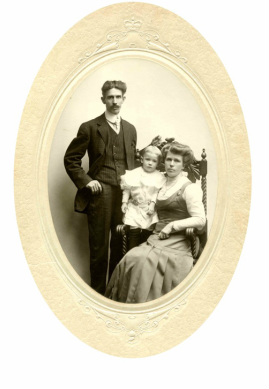 Bell Robert John, Kelvin Rankin and Alice Maude (Ryder) 1908
John married Alice Maude Ryder in Toronto in 1906 when he was thirty-three years old. She was eight years younger than John.

John and Maude had two boys, seven years apart. My father, Kelvin Rankin Bell, was born in 1907 and his brother, William in 1914. I was always told that my father was named after a famous racehorse of that time, by the name of Kelvin and a minister my grandmother admired by the name of Rankin. I guess I will never know if that was true.

John worked for the A. E. Clarke & Co. tannery in Toronto but I am unaware in what capacity. I do know that whatever it was it did not pay that well and that I was told that my grandfather wasted his earnings at the racetrack. My  father left school after grade nine to help make support the family.

When my parents first married they went to live with my father's parents, as times were not easy. I do not know how long they stayed, but I know my mother, while she got along with my grandmother was not fond of John (my grandfather.

John was, from what I was told, a difficult man and a brooder. I remember my mother telling me some of the things he would do. If she was cooking he would pass by the stove and turn the burners down complaining that she was wasting heat. If she did not notice right away then this slowed the production of dinner.

When John went into a sulk he would shut himself in his room and apparently my grandmother would know how bad the mood was by observing the following. She would take his dinner and leave it outside the door. If, when she went back it was gone that was a good sign. Otherwise, if the meal stayed there and he did not eat it, it would mean they were in for a long silence.

His obituary read as follows:

Robert John Bell a native of this district died in St. Michael's Hospital, Toronto, on Saturday June 21 after a lengthy illness.
He was born at Ashgrove 69 years ago, and was a son of the late William Bell and Jane McDowell.  He came to Stewarttown as a boy and went to school and grew up there.  As a young man he moved to Toronto and secured employment in Clark's Tannery. He was a member of the United Church and a Conservative in politics.  A brother William lives in the West at Fort Qu'Appelle, Saskatchewan. Another brother Nathaniel died in Brampton a few years ago.  He is survived by his wife the former Alice Maude Ryder who is a native of Acton and two sons William and Kelvin.
The funeral service was held from the McDougall & Brown Funeral Chapel with burial in Pine Hill Cemetery, Toronto.

The other day when going through an old box of thing that belonged to the family I came across the bill for his funeral. The total amount for the funeral was $285.00 which covered the casket, hearse, embalming, one limosine, one newspaper notice, use of the chapel. There was an extra charge of $4.00 for notices. The account went to 209 Logan Avenue which shows that they never moved from the the first street they settled on in Toronto.
Citations