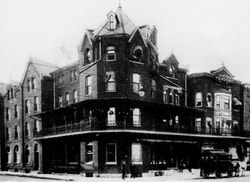 The Vendome Hotel belonging to Jacob's brother Billy. This is where he would end his days.

Jacob Henry Ryder was born May 20th 1868, in Acton, Ontario, just four years old when his mother died. He would have his life cut short as well.

As the rest of the family he moved around somewhat from Acton to Petrolia and then back to Acton to spend his teenage years.

He returned to Sarnia in 1895 at age twenty-two where he was close to his brother Billy and sister Emma Jane. He resided with Billy at the Vendome Hotel of which Billy was an owner, and most probably worked with him there.

Just two years after his move to Sarnia he took gravely ill. The news in the Acton paper said it was heart trouble. He was only twenty-nine years old.


His obituary was posted in the Acton Free Press on July 8th 1897 as follows:


He Had Many Friends.

"Referring to the death of Mr. Jacob H. Ryder, whose remains were brought here last week for interment, the Sarnia Observer says:- The news of his death was heard of with regret by his friends in Sarnia of whom he had many. Although only a resident of Sarnia for a little over two years, his kindly nature won friends for him by the score and many are the feelings of regret expressed at his early demise. The deceased suffered much during his late illness and had been confined to his room for about two weeks. He was conscious up to the time of his sudden taking off, and talked cheerfully to his brother William, of Sarnia, and his sister, Mrs. Pollard, of Petrolea, and other friends who were at his bedside, expressing his hope of a better life beyond."
Jacob Henry Ryder never married and died in June of 1897 just shortly after his 29th birthday.
Powered by