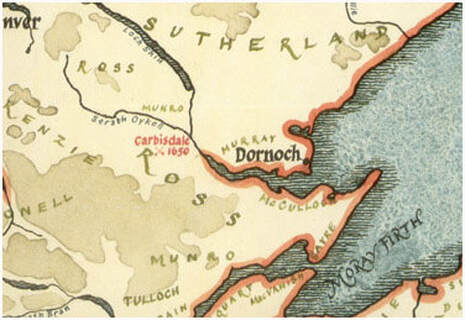 Foulis castle was the home of the Munro Clan sins the early 14th century. While the original castle is long gone, the Georgian castle that replaces it was built in the mid 18th century. There are still a few remnants of the original castle within the walls and an 11th century Mott (a mound with a wooden fortification).
In 1745 Sir Harry Munro returned to Foulis, to find it destroyed by fire and rebuilt it salvaging all he could of the old building.
​According to the Munro Clan Association the castle is still occupied by the "Munros of Foulis).

The earliest Munro I have found possibly from my family is Alexander born June 17 1760 Edinburgh Parish, Edinburgh, Midlothian, Scotland.​(1) His father was William Munro and mother Janet Clapperton. Would this be the same Alexander who married Jean Lesly? This part is possible but not proven. As is the marriage of Alexander to Jean Jan. 2, 1779 in Glasgow, Scotland. If this is true then there was much movement from the family.

What I do know for sure is that Alexander Munro lived in Dornoch, Sutherland, Scotland when he and his wife Jean Lesly gave birth to first, Alexander Munro, in 1774 on the 20th of October and then Robert Munro October 17th 1886.