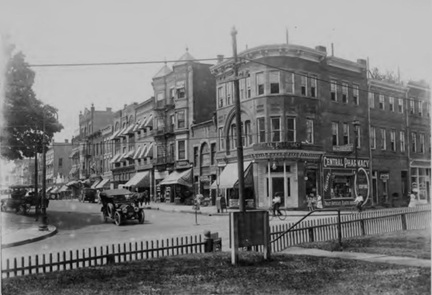 Plainfield NJ early 20th century
Thomas George Ryder named in honour of his maternal grandfather was born August 6th 1873, in Acton, Ontario. Just one year after James married Frances the family began to grow.
As most young boys at that time and living in a small community he must have grown up with friends and family around him to support him even though he lost his father while still a young lad.
Thomas lost his father when he was just thirteen and that same year moved back to his family’s original hometown. That in itself would have caused him to mature as he was now the eldest of his siblings.
Thomas left home at the young age of seventeen, and in 1891 he was in the Toronto census living with his half-sister and working as a dry-goods clerk working in a large department store.
Sometime during the next ten years Thomas left Toronto to make his way in life and started working for a men’s haberdashery in Plainsfield, New Jersey.
It was there in the spring of 1900 that he developed pneumonia and was very ill. His mother Frances and brother Fred went to Plainsfield on the Saturday but Thomas by that time was in a coma. He never regained consciousness and died on the following Tuesday. They returned to Acton with his remains for burial.
The service took place at his mother’s home on Mill Street and he was buried in the Churchill Cemetery. He was just twenty-six when he died and a well known and liked native of Acton. Thomas would be missed.
Thomas George Ryder died on May 15th 1900, in Plainsfield, New Jersey. He was only twenty-six years old.

Ryder, Thomas, News, appeared in the Acton Free Press, 17 May 1900, page 3, column 2
A Sad Home-coming.
Last Friday the distressing news was received at the home of Mrs. James Ryder that her son, Thomas, was lying very ill with phemonia[?] at Plainfield, N.J., where he occupied a situation. Mrs. Ryder and Mr. Fred Ryder went to Plainfield on Saturday, but he was in a state of coma when they reached him and he never rallied, and died on Tuesday evening. The friends will return with the remains by this afternoon's train. The funeral will take place to-morrow afternoon at three o'clock from the home of Mrs. James Ryder, Mill Street, to the Churchill Cemetery. The deceased was a native of Acton and was in his twenty-seventh year. He was a young man of good ability and a favorite with all who knew him. Much sympathy is felt for the bereaved family.
The following week there was yet another notice in the local news.

Ryder, Thomas G., News , appeared in Acton Free Press, 24 May 1900 , page 3 , column 2
The Late Thomas G. Ryder.
The remains of the late Thomas G. Ryder arrived from Plainfield N.J. by Thursday afternoon's train. Sympathizing friends and neighbors were here to meet the bereaved mother and brother who went to the death bed of their loved one. The remains were interred in the family plot at Churchill Friday afternoon, Rev. H. A. McPherson, pastor of the family, performing the funeral rites. Mr. Ryder was born in Acton in 1873. A young man of 17 he left home and took a situation in the departmental store of R. Simpson & Co. A year and a half later he engaged with Wightman & Co., Spadina Ave., where he spent three and a half years. He then went to New York and was for some time in the large wholesale house of Chas. B. Roos. Three years ago this summer he went to Plainfield, N.J., and at the time of his death was at the head of the gents furnishing department of one of the best stores in the city. He had many friends in Plainfield and during his last illness they ministered to his comfort and secured for him the most skillful physicians and nurses. His prospects for the future were excellent and there is general regret at his early demise.
This was James and Frances first child. It must have been quite a shock to her to lose him at such a young age. Her youngest of the stepchildren had died just three years prior to Thomas so Frances was barely past grieving the loss of one child before the death of a second.
Powered by