​Over the past year I have learned much more about William Bell's wife Flora. According to the Irish census of 1821 for Derryvullan, County of Fermanagh, Ireland. I believe this family of Bell's to be my ancestors. That census began to be recorded at the end of May 1821. Flora was born in 1781.(1) She and William had but one child, Hugh, who at the time of the census was recorded as being 11 years old. As there are no other children in the family I must assumed that either she and William married later in life or she had difficulty bearing children.
​           She would have been at least twenty-nine when Hugh was born which in those days was late for a first child. I have since discovered new information which show Hugh had possibly two brothers and one sister. None are present in the 1821 census so I presume they died. I know names and birth dates and the names of their parents and nothing more.
During the 1820's times in Ireland were difficult not only for the Catholics but the Protestants as well. In the North Eastern part of the country flax growers and weavers suffered due to the mechanicalization of the trade. Reforms in worker unions caused strikes, resulting in higher crime rates and punishment being enforced.
The British government imposed high taxes on grains forcing the Irish to depend on their potato crops. It was said they ate two and sometimes three meals a day of potatoes.
I have been able to find proof that Flora made the long journey to Canada and remained there until her death.

Thomas Bell (1808 - )
Thomas was baptized on February 14, 1808 to William Bell and Florence (last name absent). Not sure as all the others are with William and Flora.

The Census for 1842 in Canada does not name family members but it does show the land that William Bell had been living on and the produce they had for that year. It indicates that they had been their for twelve years as there is a house and much of the land is cleared and producing crops.(4) The census does total the number of members in the family and some other details. It appears there are nine people in the house, who belong to the Church of England. William is dead at this time but Flora is still alive and Hugh would have been running the farm. I calculate there should only be seven or eight but there could be one or two hired hands living on the property. Perhaps Robert Bell who appears in William's will lived and worked with them securing his future by working for the family. 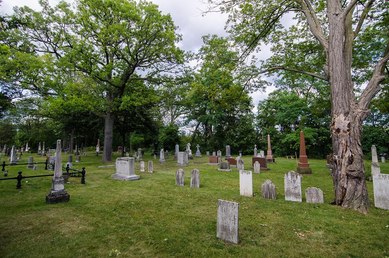 Unfortunately the Census for 1852 in Canada West for the area is unavailable, which would give us more information about the family. Flora would still be alive at this point.
Flora Ann died January 26, 1856 and is documented as 84 years of age. She refused a burial service and while she is also documented at the wife of William Bell and is buried at Saint Peter's Anglican Church in Erindale, her name does not appear on his stone.​(5)
Click on the link for an interesting History of Saint Peter's Anglican Church Erindale.
***I have recently found DNA evidence that could prove Flora's last name could be Little. This is featured in my latest blog post. "Where Do I Go With This?"

!!!!     ​Further Information
Just this morning I made another possible discovery regarding Flora. I foun what could be her father Thomas, mother Elizabeth, and brother James. Thomas and his wife and son James are buried in neighbouring Fivemiletown, Tyrone approximately one hour from Drumbulkin by horse and cart.
Thomas died in 1802 which could further support the naming of their first child Thomas in 1808. More work and luck will need to be done to support this but it is a start.
What I know so far:
Thomas (17??-1802) died 18 Feb 1802
Elizabeth (17??-1817) died Sep 1817
James (????-1841) died 6 Jun 1841

This might also indicate that William and Flora migrated to Fermanagh from Tyrone. I have information that indicates Susannah Dunbar was from Tyrone which could also connect the families. Much to investigate. There are 30 of the Little family buried here. There are also a number of the Bell family in particular H Bell (1675-1751).
​Stay tuned.