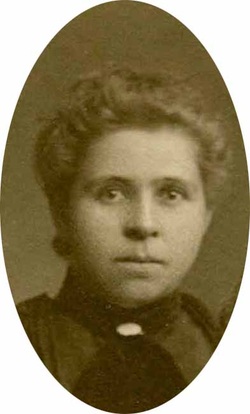 Hannah Elize "Bertha" Priscilla Ryder
Hannah Elize Bertha Priscilla Ryder, born February 23rd 1875 in Acton, Ontario was James and Frances second child. Her name included then name of Frances mother and of James first wife (Frances aunt). However, to all in the family she was Bertha or "Bertie". I do not know if the name Bertha was in honour of someone the knew or just a name they liked. When they left Acton for Petrolia Bertie was only a toddler so she was not even aware of the change of place.
However when her father died in 1886 she would have been eleven and it would have been a troubling time for her. Her move back to Acton would have been somewhat unfamiliar and to Bertie not like home. It would appear however that her mother was not happy in Petrolea because she moved back to Acton near family and friends right after the death of husband James. During the years that they lived in Petrolea she made many visits to Acton and quite possibly brought the children along to visit kinfolk and friends.
When Bertha moved back to Acton she would have had many years to create new friendships and feel comfortable in the community. She like all of James and Frances children did well in school.

The local newspaper had a review of the event that was posted in their social section called “The News at Home” describing the affair.
This notice was published on March 18th 1897 in the Acton Free Press which shows an error in the registration of the marriage listed as February 10th 1897.
“A Happy March Wedding”

The nuptial bonds by which a happy couple were united securely tied by Rev. H. A. Macperson last Wednesday evening. By this interesting ceremony Miss Bertha Ryder, daughter of the late James Ryder, one of Acton’s most energetic businessmen twenty years ago, and Mr. Andrew Vance of Cheltenham, were joined in wedlock. This joyous event was consummated at the home of the bride’s mother corner Mill and Wellington streets. The bride was attended by Miss Alice Chisholm and her brother Mr. Fred Ryder acted as groomsman. The bridal couple were the recipiants fo many tokens of friendship and esteem. They leave this week for the Northwest, where they go with courageous hearts and good prospects to build up a home for themselves.”
Andrew and Bertha moved out west to Brandon, Manitoba immediately after the wedding with Andrew's younger brother and sister. The 1901 census has the four of then living at the same residence. Andrew is listed as a hotel keeper and William, his brother, a farmer, indicating that they must have lived outside the city limits.
While on a visit home in January of 1902, Bertha contracted smallpox before arriving in Acton. She recovered but not before infecting her brother Fred. Fortunately he recovered as well. The newspaper mentioned that there were over 400 Actonians that had been vaccinated in accordance with the reeve’s proclamation and yet the doctors were still busy fighting the disease.
They returned to Ontario to Andrew’s family farm by 1911 and were living with Andrew’s parents when their son Alex was born in 1907. Andrew is the head of the household and is farming the land. His parents are elderly and I would imagine that he being the eldest boy stood to inherit the farm.
After the death of his parents Andrew and Bertha moved back out to Manitoba and settled in the Souris District, Municipality of Arthur. They lived in the village of Elva and Andrew is listed as a labourer. The family has grown and they now have four children.
Alexander 13, John 9, Roy E 6, and Edith 5 were all born in Ontario which indicates that they only moved back to Manitoba after 1915.
Bertha died in Winnipeg, on Sunday September 28th 1952. She had been widowed since the death of her husband  Andrew in 1938.
Left to mourn the loss of a dear mother and grandmother were her three sons, Alexander, Roy and Jack, and her daughter, Edith (Mrs. Robert Bill), all of Winnipeg. She also had fourteen grandchildren and three great grandchildren. Surviving her were also her two brothers and two sisters; Fred of Brockville, Edward of Acton, Maude (Mrs. John Bell) and Laura (Mrs. Robert Elgie) both of Toronto.
Bertha who was in her 78th year was born in Acton, a daughter of the late Mr. and Mrs. James Ryder. She was interred was in Brookside Cemetery, Winnipeg on October 1st. Bertha was predeceased by her husband Andrew.
Powered by