The original Henry Ryder Farm eventually going to Thomas and John in the north west of Esquesing 3rd line just outside of Acton.

​​​​​          Mary Butler was born in Lambourn, Berkshire, England and baptised April 15, 1810. Mary's parents were David Butler and Sarah Jerome.
​​​​​          Prior to Mary I have little information about the family. I did find two siblings, David and Elizabeth but little else. He father was the child of Elizabeth Butler and the father is unknown. Did he die before the couple had a chance to marry or was she left to fend on her own. This suggests that David had a difficult upbringing.

​​​​​          Mary married Henry Rider when she was in her nineteenth year, March 29, 1829​ in Lambourn. The couple remained there for several years, before immigrating to Canada.

​​​​​          Their life would not have been an easy one. They were pioneers of this country and together raised a family of at least twelve and possibly thirteen children. 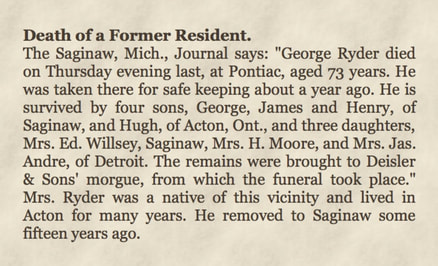 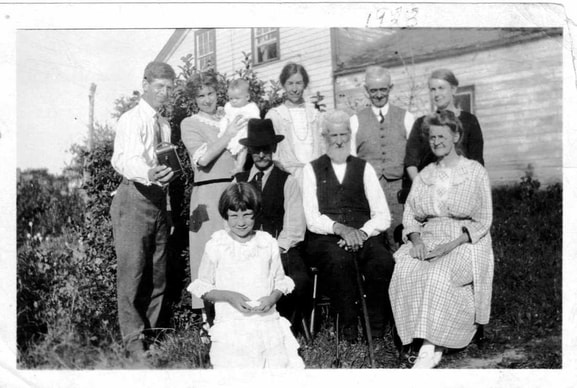 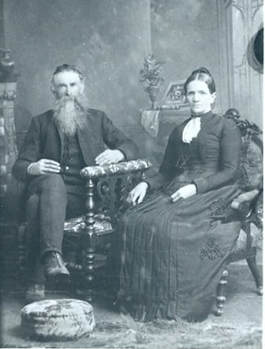 Masalas, Jacob and Ann (née Ryder)
appeared in Acton Free Press (Acton, ON), 13 Dec 1906, p. 3, column 3
In Death Not Divided
Mr. and Mrs. Jacob Masalas
Both Die within Five Days
Jacob Masalas and Ann Ryder spent fifty-five years together in wedlock, and when the faithful and beloved wife was called home on Wednesday of last week, the lonely husband lingered afterward, but five days, when his spirit took its flight and to-day he will sleep beside her in the family plot in Fairview Cemetery.
Mr. Masalas has been troubled for some time with dropsy and gradually grew worse. On Monday he was taken to the hospital at Guelph and a few hours after arrival deth ended his sufferings. His remains were brought home Tuesday evening and the funeral willbe held this afternoon at 2:30.
About the middle of November Mre. Masalas was striken with paralysis and never rallied. She died on Wednesday of last week and the funeral was held on Friday afternoon.
Both Mr. and Mrs. Masalas were native sof this country. Mr. Masalas was the son of the late Peter Masalas and was born in Nassagaweya on the town line, in 1829. His wife Ann Ryder, was a daughter of the late Jacob (Henry) Ryder, and was born in Trafalgarin 1833. They were married in 1851 and settled on the farm at present occupied by David  Black Esq., Nassagaweya. In 1871 they purchased lot 2 con. 3 Erin, and resided there for twenty-three years. In 1 894 they came to Acton and for twelve years they have been esteemed residents here. Seven sons and five daughters blessed the home and all but one reached maturity. There were Mrs. Thomas Gamble, Peter, and Mrs. Isiah Coon, Acton; Nelson who was a Baptist minister in Michigand and died two years ago; John, of Wassau, Ohio; Thomas of Parry Sound; the late Mrs. William Allan and the present wife of Mr. William Allan; Mrs. E. F. Gamble, Acton, Norman of Hepworth, and Howard of Acton. The funerals were both conducted by Rev. H. C. Priest, B.A. assisted by Rev. g. W. Barker. The remains were carried to the grave by three sons and three sons-in law.
James Ryder (1835 - 1886) (1) Mary Priscilla Swackhamer (1839 - 1872) (2) Frances Sophia Martin (1851 - 1932)
​
​​​​​          James Ryder was my great-grandfather and Frances Martin my great-grandmother. James sired fourteen children of which my great-grandmother was stepmother to five and mother to eight. She raised them after the death of Priscilla. Henry Ryder, his father, left him $50 in his will.
​​​​​          This is my ancestral link to the Ryder family. There is more information here. Just click on each of the above links to open a new page for the family.
Sarah Ryder (1836–1836) 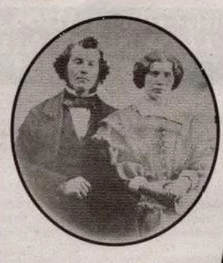 
​​​​​          There was an interesting story about Mary and William's son Alexander "Vesey". He was know was unable to walk due to an affliction with his back. This was an incurrable disease but the young man became a wonderful carver of doll furniture. He would finish the pieces just like real furniture. He died at a very young age due to the affliction and is buried in the old cemetary. Acton Free Press
William E. Ryder (1840 - 1920) Eliza Jane Parks (1847 - 1923) 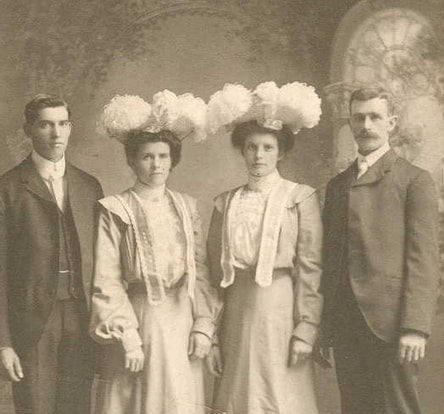 Double wedding of Fred Denny, Ida Denny(Murray) and Edith Murray(Denny),Peter Murray
Murray, Andrew Sr., Mrs., (nee Amelia Ryder) News appeared in Acton Free Press, 1 Jan 1919, page 3, column 2 IN MEMORIAM
MRS. ANDREW MURRAY
The first death in the family of Andrew B. Murray, Sr., took place on Saturday when Mrs. Murray passed away after a very brief illness. She had been over at her daughter's, Mrs. E. J. Kingsbury's at Crewsons Corners, during the illness and funeral of Mr. Kingsbury and caught a heavy cold. This developed into pneumonia with fatal results. Mrs. Murray was Amelia Ryder, daughter of the late Henry Ryder, of the third line. She was 73 years of age. Fifty-three years ago last May she was married to her sorrowing husband. Three years ago they celebrated their golden wedding with their children and grandchildren all participating. Mr. and Mrs. Murray spent all their married life in this vicinity. Five sons and three daughters blessed the home, all of whom survive and reside on farms in this section with the exception of Edward, who is a millwright in Kitchener. They are Peter, Thomas Hilliard, Wesley, Edward, Andrew, Jennie, Mrs. Edward J. Kingsbury and Mrs. Fred Denny. Mrs. Murray was a member of Siloam Methodist Church. The funeral was conducted on Monday afternoon by her pastor, Rev. W. E. S. James, B.A., R.D. Mr. Thomas Ryder, a brother, died on November 17, last. 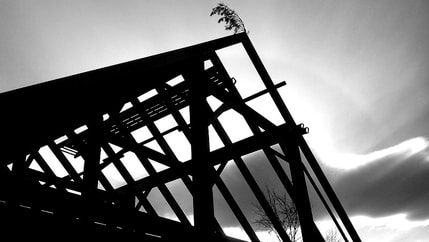 Mary Jane Ryder September 03, 1848. She was Henry and Mary's youngest daughter. She like others in the family would marry into the Swackhamer family, however not one of Jacob's sons but rather one of Jacob's brother's  John's sons.
​​​​​​​          Mary Jane married Danford Swackhamer when she was nineteen and he twenty-three. He would take over the John Swackhamer farm at some point.
​​​​​​          The couple had a total of five children in their marriage cut short by tragedy. Angeline Pricilla Swackhamer-Chisholm (1867 - ), Roxy Swackhamer-McLain (1869 - 1935), Orpha Swackhamer-Forbes (1871 -1890), Franklin Swackhamer (1874 - 1944) and William Danford Swackhamer (1879 - )
The year Mary Jane became pregnant with William Danford, her husband was killed by a timber from a barn raising bee to build a new barn for their farm. Daniel was just thirty-three December 18, 1878 when the misfortune befell them. William Danford was born four months later and named in his father's honour.
​​​​​​          Mary Jane would lose another child before her time. Orpha died six months after her marriage to Thomas Forbes before her nineteenth birthday.
​​​​​​          At the time of his death Henry left her $50 in his will.
​​​​​​          Mary Jane Swackhamer died at 745 Markham Street, Toronto at the home of her son Franklin from senile decay. She never married after the death of Danford, choosing instead to raise her family alone. She is buried with her husband in Churchill Cemetery in Acton. 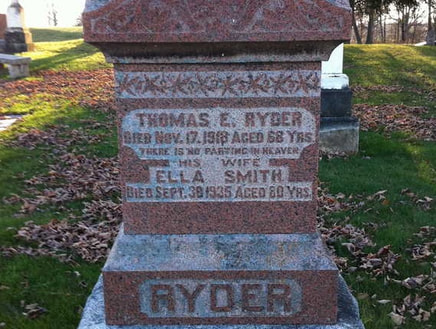 The inscription speaks well of their union.
Thomas Edgar Ryder (1850 - 1918) -- Ella Smith (1855 --1935)
​​​​​​          Thomas born on 18 April 1850 seems to be the only one of Henry and Mary's children that did not have a family of their own. He would also be the one to get the largest inheritance from his father. When Henry died Thomas got 90 acres  E and S Lot 31, 4th Conc., that is to say the family farm near Acton. He was yet to marry when Henry died.
​​​​​​          He married Ella Smith on October 5, 1875. Her mother was one of Jacob Swackhamer's daughters. This shows how interconnected the Ryders and the Swackhamers were. Among several family name that appear often are Swackhamer, Denny and Masales, all who were implicated in the original Churchill Congregational Church.
​​​​​​          Thomas died November 17 1918 and and while Ella went on to remarry when she died in 1935, her remains were buried alongside her first husband in Churchill Cemetery.

Create your own unique website with customizable templates.
Photo used under Creative Commons from Sterling College