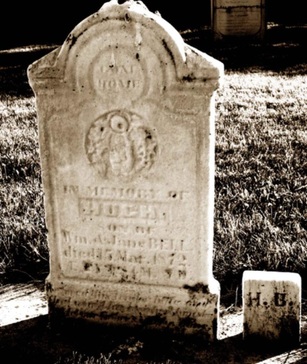 ​Hugh Bell (1870 - 1872)
Hugh Bell was William Bell and Jane McDowell’s first child, named for his paternal grandfather. He was born February 26th 1870 and lived but two years.(1)
Hugh died March 16th 1872 in Ashgrove, Ontario. The cause of death was not marked on the death registration.(2)​ The child was buried at the Ashgrove United Church Cemetery.(3)

*The text at the bottom of the headstone is illegible. What does the small stone stand for?
​
Citations

William James Bell (1871 - 1948 Ada Morgan (1872 - )
William and Jane’s second child was named for his father and his paternal grandfather. William James, born on September 26th 1871 in Ashgrove, Ontario would be the eldest child to live to adulthood. His birth registration lists only James as his name.​(1)
In the 1881 Census William is living at home with his father and two younger brothers.(2) By the 1919 Census William while still at home, lives with his father and his father's new wife Catherine Coventry, his two younger brothers, and two relations of Catherine Coventry, possibly daughters. He is employed as a farm labourer.(3)
When William was a young man he moved out west to Homestead, first near Kenloss and Indian Head and finally settled near Qu’Appelle Saskatchewan. The 1901 census lists the area as Hillfarm, Assiniboia East, the Territories.(4) 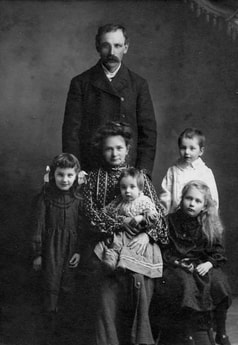 After moving west Will met a young woman by the name of Ada Morgan originally from England.(5) They married soon after and on June 8th 1900 had their first child, Lillian P. Bell. They would have six children.
Myrtle Florence, September 1902, William Ernest George Bell, July 7th 1904, Elsie G. Bell, January 5th 1906, Orval, October 3rd 1908 and Eva, November 1st 1910.(6)(7)(8)
Will was a market gardener on a small farm out west and remained there all of his working life. When he retired in 1945 he and his wife moved back to Ontario and settled in a house on Victoria Street in Georgetown.
William and Ada attended the Knox Presbyterian Church and William continued his interest in agricultural affairs. He had been a long time member on the board of the Qu’Appelle Agricultural Society.
William outlived his two younger brothers John and Nathaniel.
William died, on October 24th 1948 at seventy-seven years of age.(9) His wife, six children, and twelve grandchildren survive him. William was described as a member of Pioneer Esquesing Family in his obituary. He is buried in the Greenwood Cemetery in Georgetown.(10)
Citations

Nathaniel Cameron Bell (1874 - 1932) Mary Victoria Thompson (1882 - 1969)
Nathaniel Cameron Bell was born October 10th 1874 in Esquesing, Ontario. He was the forth son of William Bell and Jane McDowell.(1)
For the next two census he can be found with his father and brothers.(2)(3)
The 1901 census has Nathaniel listed as a boarder at Samuel McGibbon’s hotel 79 Main Street South in Georgetown, Ontario.(4) There is still a hotel in Georgetown with the same name today. It would seem according to information about this hotel that it was built by Robert James in 1849. He sold it to Thomas Clarke in 1867 and it was then known as Clarke’s Hotel although the real name as more likely the Exchange Hotel. A fire in 1888 destroyed the two leveled building, prompting a reconstruction in which a third level was added.  In 1895 Samuel Hopkins McGibbon leased the hotel. It has been know as the McGibbon hotel ever since.
He married Mary Victoria Thompson, daughter of James Thompson and Esther Ann Little of Georgetown March 27th 1902.(5) Nathaniel and Mary would have three children, Deretta May, July 1903, Alvin Basil, September 1905, and William James “Cameron”, December 1907.(6)(7)
Nathaniel was a machinist by trade. He worked for Creelman Brothers knitting machine factory, as a tool maker. He resided in Georgetown for many years before moving to Brampton, Ontario.
He died Feburary 3rd 1932 in Brampton at his home, just fifty-seven years of age.(8) It mentions in the obituary that he was a good citizen and an honorable man and that he would be deeply missed by friends and family.
The funeral was attended by 25 Oddfellows from the town as Nathaniel had been a member of Orion Lodge, No. 109 L.O.O.F at Brampton. The Friday afternoon service was conducted at the home by Rev. Mr. Soper of Brampton and assisted by Rev. Mr. Rumley of Georgetown who preached the sermon. The Oddfellows conducted their service at the grave. Well attended, there were many beautiful floral tributes to the deceased.
Mary lived to be eighty-nine years of age and remained healthy and in her own home until the end. She died February 27th 1969. Her daughter Deretta, survived her along with four grandchildren and eight great-grandchildren. Both of her sons Alvin and Cameron predeceased her.
An interesting aside told to me by a cousin and immediate family of N.C. Bell. His son “Cam” had a 1929 black car with a rumble seat. Apparently Nathaniel, although unable to drive liked to have his picture taken in it.
See Blog: ESQUESING TOWNSHIP, ONTARIO   (PART 2)05/07/2014 STORY ABOUT CREELMAN BROS AND MCGIBBON HOTEL GEORGETOWN​ 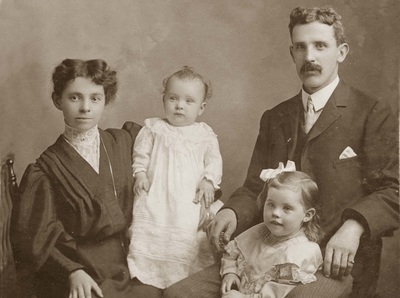 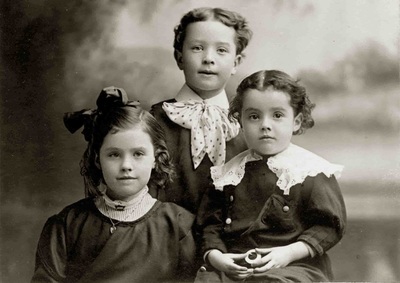 Joseph Bell (1877 - 1877)
Joseph Bell was born August 26th 1877 and died September 11th of the same year. He was just two weeks of age from diarrohea. His mother Jane died August 30th 1877, only four days after his birth. William and Jane were never to have any girls in their union, and only three of their boys would reach adulthood.
Citations