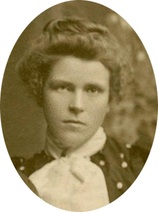 Maude Ryder
Alice Maude was born August 26th, 1881,(1) the daughter of James Ryder and Frances Sophia Martin of Acton, Ontario. She was born in Petrolia, Ontario but when her father died in 1886 her mother sold his carriage business there and moved her family back to Acton, which must have always been home to her. She built a large red brick house and raised the remaining family here.
Their mother had been well provided for by her husband and their home in Acton was more than adequate. It did not mean that she let them loll about. They all became employed and brought their income into the house until they married and moved away.
That said, they also enjoyed their lives in Acton and often had their portraits and photographs done at R. Ramshaw, the local photographer. I have many such photographs.
Maude was an attractive young woman with beautiful strawberry blonde hair and pale blue eyes. Her skin was quite pale and flawless. Always well dressed, she always made a good subject in the photographs that were take of her. There are many photos of Maude, her sisters and her friends. Perhaps this is because there was a connection through an older brother to the Ramshaw family in Acton. 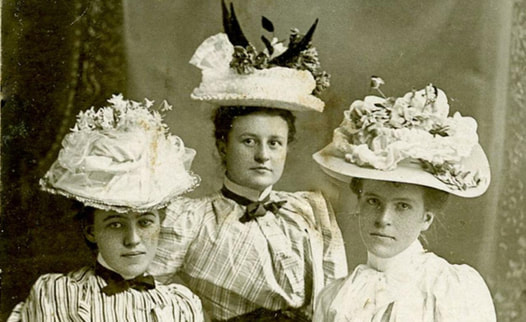 “A happy event took place at Chalmers Church parsonage, 12 Delaware Avenue, Toronto, last Wednesday, May 30th, when a well-known Acton young lady Miss Alice Maud Ryder, daughter of Mrs. James Ryder, was united in marriage to Mr. R. J. Bell, of Toronto. Rev. H. A. McPherson performed the ceremony. The bride wore a pretty travelling gown of pearl gray eolienne* and carried a bouquet of blossoms. After the ceremony the happy couple came to Acton where a reception was tendered at the home of the bride's Mother on Thursday afternoon. Guests were present from several adjacent towns as well as friends and relatives in Acton and the function was very enjoyable. Among those present were Mr. and Mrs. Wm. Bell and Mr. and Mrs. N. C. Bell and Miss Coventry Georgetown; Mr. and Mrs. Vance, Cheltenham; Mr. and Mrs. Cheney, Hillsburg and Mr. Nelson Ryder, Toronto. Mr. and Mrs. Bell will reside in Toronto and will be at home to their friends at 217 Logan Avenue.”

*eolienne (lightweight blended with wool or cotton, sometimes with a fine rib or small brocade pattern and lustrous finish) and marquisette.

Maude was from a large, well respected family in Acton and as mentioned the wedding was well attended.
In June of 1907 Maude and John had their first child, my father Kelvin Rankin Bell. It would not be until 1914 that they would have a second son, William, who would also be their last. 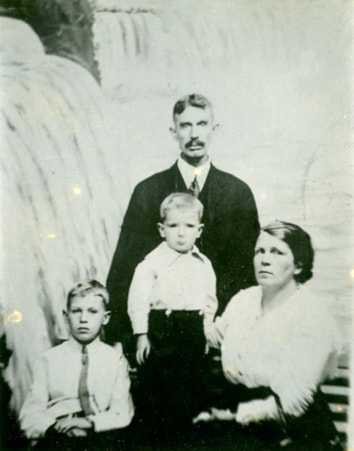 John Bell with his wife Maude and two children Kelvin left and William centre about 1917 at Niagara Falls, Canada.
Maude, as many women in my family did not live an easy life. Her husband John worked for Clarke & Company a large tannery in Toronto. While the 1921 census lists him as a labororer, he seems to earn a wage that would have been in order with others living in the area. Yet, according to my family, John was a gambler and wasted much of his money at the racetrack. Maude supplemented their income with her talents as a glove maker.
When my father just finished grade nine, he left school to help support the family. Once he married, he and my mother lived with Maude and John for a while to help bring money into the house that would not be wasted. 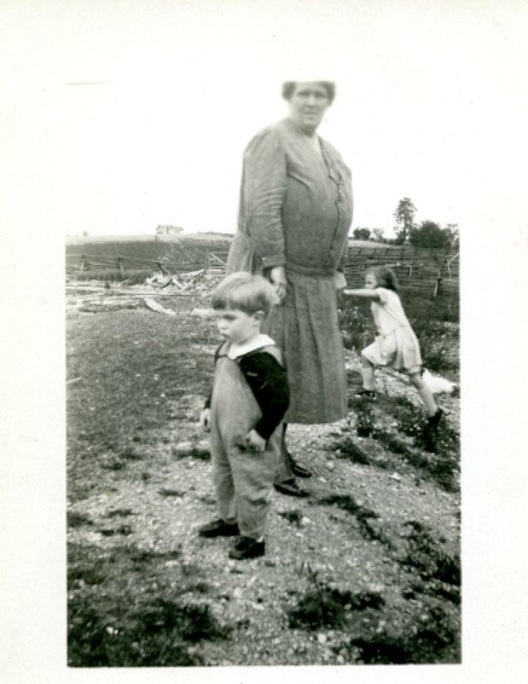 My "Nana" Maude with my brother Darcy about 1931
When I knew my grandmother, she was a widow in her mid-seventies with an infirmity. She was a “stout” woman as my family called it, but she was also tall at 5’ 7”, tall for women of that era. Her hair had faded somewhat, but never greyed until several years before her death.
She wore her wavy hair pinned up with tortoise shell hairpins that I found quite interesting, and a corset made of whalebone. She was definitely from another era. I was always curious when she took down her hair and braided it before she retired for the night. My father would bring her for dinner to our house every Sunday.
She lived in a room near Pape Avenue in Toronto and her landlady also a widow was Mrs. Masales. This woman was a distant relation as my grandmother’s uncle George, on her mother's side was married to a Masales. Her aunt Ann, on her father's side was also married to Jacob Masales, so there were lots of Masales in our family background.
Her room in this house was a large, bright space on the second floor equipped with a hot plate and a small refrigerator. The bathroom was down the hall at the back of the house and while there were other rooms on the second floor, only one, was occupied. I never saw anyone else except once I met the landlady.
By this time my “Nana” was quite lame in one leg. She had had something my family called ulcerated phlebitis and there was a large hole in her calf. I only saw it once when she was changing the dressing, which she did daily. Her leg was always bound with an elastic bandage. I do not know why it did not heal. According to all I have read her weight must have been a big factor. My mother said that Nana had one time stayed bedridden for several months to heal, but when she got up again the wound opened up.
Due to her infirmity, she was not able to walk well or stand on her feet for any length of time, spending most of her day by the window seated in a chair. To pass the time she did handwork. Amazing handwork.
Crocheting was her specialty. All my mothers pillowcases had crocheted edges and I still have a bedspread crochet by her from fine cotton thread.
Perhaps I speak of my grandmother differently than my other grandparents and that would be because she was the only grandparent I knew. She was kind and when she died May 26 1965,(3) from cancer at eighty-four, I did miss her. She was a good lady who faced the life she was given with inner strength, never complaining of the cards she was dealt.. 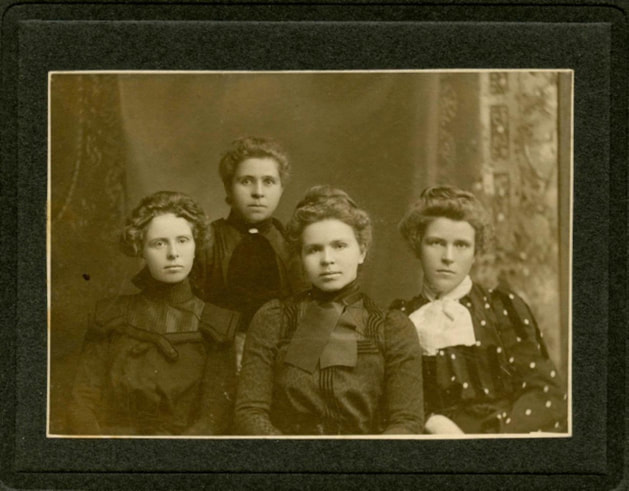 
William James Bell (1914 - 1997) Margaret Buck (Unknown- aft 1996)
My father's brother William was the second and last child born to Robert Bell and Maude Ryder. Whether she lost any children in between is unknown but there is seven years between the two brothers which suggests either that or that the couple had trouble conceiving.
Bill was born ​12 April 1914,(1) in Toronto's eastern downtown area. He grew up, like my father on Logan Avenue a modest working class family. When Bill left school, my father got him a job with Underwood Typewriter Company, where he worked. Bill, also like my father stayed with the sales department of the company all his life until he retired.
Bill married Margaret Irene Buck, daughter of Ernest James Buck and Agnes Gold Wilson of Ernestown Township, Lennox Addington, Ontario, the 14th of August 1937, and the couple would have two children, a boy and a girl.
For many the family lived next door to us on Armour Boulevard in Toronto, Ontario.
In his retirement years, Uncle Bill and his wife Aunt Margaret left Toronto and lived on Stoney Lake in what was once their summer home. Eventually they sold it and moved into Peterborough in a townhouse and spent their winters in Florida.
In 1997,(2) William died in Fort Meyer's Florida leaving behind his wife Margaret and son Jim, as well as grandchildren. His daughter Judith pre-deceased him by several years. 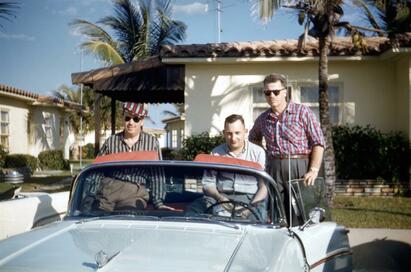