Another possiblility would be that Robert Stevenson's father was named Robert. This would indicate he was the first and possibly only child. A Robert has been located in the town of Donaghadee, married to Sarah Munn. This couple comes up as Church of Ireland, and while my Robert was identified as Methodist, I have been told prior to 1824/35 the Methodists used the Church of Ireland.
This couple had a child October 9, 1820,(3) by the name of Robert.

Robert Stevenson was most likely born in Donaghadee, County Down, Ireland, Nov 1, 1821.(4) I have found a baptism, which I believe to be him naming his father as James. This was not an easy time and while the countryside is beautiful the description of the area would deem otherwise. He also has military records that identify Donaghadee, as his birthplace.
He entered into marriage June 6, 1841, Barony, Lanark, Scotland with Janet Munro,(5) at the age of twenty.
Robert entered the Military between 1845 and the time he immigrated to Toronto, Ontario, Canada which is between 1845 and 1849.(6) Perhaps as well as provide work, it also allowed him to leave Scotland and find a better life for himself and his family. Unfortunately, their life in Toronto would not prove to be much easier.
The Ontario census for 1861 has lots of information about the family and while the family did not have a lot they did own a 1-½ story house  on 396 King Street East in St. David's Ward valued at $1000. The house measured only 16-½ feet in width and sat on a lot 99 feet in depth. The family of seven children was listed as New Connexion Methodist. The two eldest Robert 19 and Janet 17 were born in Scotland, while the others were born in Canada.(7) 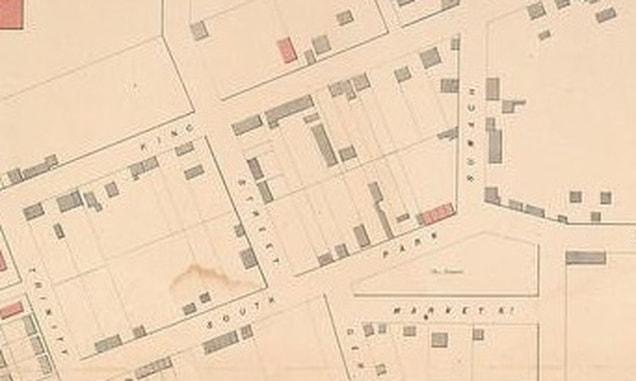 Toronto, St. David's Ward showing the approximate placement of the Stevenson house on King Street south side, east of Trinity. 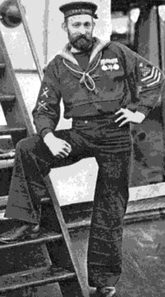 RN First Class Petty Officer, 1827[xxviii] Note the rank badge on his left arm.
* The picture to the left shows the uniform Robert might have worn as a mariner.
​

Robert Stevenson -- Seaman Certificate
Date of Birth November 21, 1821
Donaghadee, Down
2nd Mate
5’4” ruddy complexion, brown hair, blue eyes, no marks
First went to sea as a boy in 1834,
can write
address while on land Bishop Street, Glasgow
Issued May 1845 in Glasgow
By the 1871 census the family had changed in that Robert is still at home but Janet has left. Sarah is also no longer there. John 19, Isabella 15, James 13 and Agnes 10 are still present and there are  two additions, William 8 and George 6.(8) Robert is working as a clerk.
Robert survived his wife by two years but died in 1878 at the age of 56. The transcription of his death says he is only 50. He died from stomach cancer of which he had suffered during two years. In his death notice it mentions he was a wharfinger.(9) Robert is buried at the Toronto Necropolis Cemetery. The body was removed in 1989 and re-interred at Mount Pleasant Cemetery, Section T Lot # 154. A letter received by my first cousin in 1979 refutes this and according to the letter it mentions the Stevenson family moved most of their family to Mount Pleasant but not the McEwan family. It implies that Robert Stevenson and wife Janet Munro are actually still at Necropolis. Something to further investigate.

**I will continue to search for more information on the ancestors of Robert Stevenson but for the moment I have hit a brick wall. The lack of documents available to me in Ireland for this time period presents a challenge.**
Powered by