Jane Katherine Ostrom was the second youngest of Simeon Charles Ostrom and Frances Knight. She is referred to most of the time as Jenny, not Jane. She was born in Garden Hill, Ontario a small hamlet near Port Hope August 7 1886.(1) It would appear that Frances and her husband Simeon had moved from the family farm to another location about twenty-five kilometres west of Bowmanton. This further solidifies the fact that her father Simeon was most likely a migrant farm worker.
Jenny is also present in the census of 1891,(2) with her mother and grandparent in Toronto's centre east. However I am unable to locate her in the 1901 census.
Jenny married Charles Medforth March 11 1908,(3) in York, Toronto. Charles was from the Woodbridge area. Jenny and Charles remained in Ontario until after the birth of their second child. It is possible they left Toronto after the death of Frances, her older sister as there was no other family remaining there. 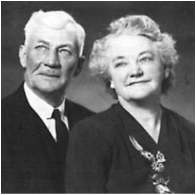 Charles and Jane Medforth 1946
Charles and Jenny moved out west like many of the Ostrom family and settled in the Pennant area of Saskatchewan, nearby her mother and brother.
Jenny and Charles had four children, two born in Toronto, Robert and Vera and the two youngest Margarita and William at Jenny's mother's farm near Cantuar. Of those children I was able to find out that the two eldest served in the military during WWII. Robert moved back to Ontario at one point prior to the war but died in Belgium during the war. He was with the RCAF. Vera also served as a nurse in the War. The entire family was quite active in the community and there is a lovely write up in a local history book about the "Bill and Miletta Medforth" family.(4)
Jenny was one of the organizers of the Farm Union Womens club in Pennant at the Masonic Hall April 6, 1925. Her husband Charles was a member of the Mason Organization.
In 1924 Jenny was a first officer in the Pennant Chapter #43 of the Eastern Star.
As mentioned in another local history book, the Medforth's were very involved in their community.
Their oldest son William was a member of the Pennant junior Grain Club organized by his father in 1933. Charles was the third leader of the group and carried on until the war. After the war the club dissolved and was replaced by the 4H.
The family was well known and respected in the area. They can be found on the 1921and 1926(5,6) census​'.