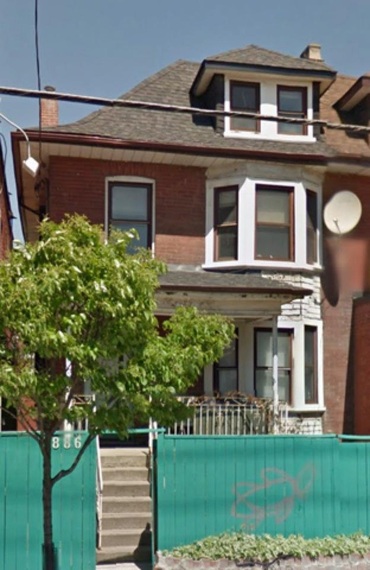 Martha Matilda Priscilla Ryder was the first child of James and Mary Priscillia. She was born February 12th 1859 in Linwood, Ontario, Township of Wellesley, County of Waterloo, Ontario.
The 1861 census James 27, and wife Mary P. 20, living Waterloo County, Wellesley Township. James was working as a Blacksmith. They occupied a frame house and Martha was just one year old at the time. There was a Blacksmith apprentice by the name of Z. Givens, age 17 living with them. This would have been normal back then to have an apprentice living on site.
By the time Martha was five the family had moved back to Acton closer to family and her father had continued his business as a blacksmith and carriage maker in Acton. By then she already had a younger brother and sister.
Martha lost her mother when she was just about to turn thirteen years old, an especially difficult time for a young girl to lose a mother.
At that time her cousin Frances age twenty-nine, was living with them and helping with the family which had grown to three girls and two boys. The youngest boy was just four.
Martha was still to young to care for all the children and her ailing mother and that was probably why her older unmarried cousin came to help.
In January of 1878 Martha married Charles G. Long, a carriage painter from Georgetown son of Robert Long and Jane Glen.
Martha would not witness the fire that destroyed her family's home and business. Due to the fire James and France decided to move to Petrolia. Martha and her husband Charles would follow. Their first son Charles Bertram would arrive in April of that same year.
Charles Bertram was born April 26th 1878, most likely in Georgetown before the move. Martha and Charles senior would soon have two other children, Ethel B. born March 15th 1881 and Mabel L. August 15th 1885.
In 1888 Mary Augusta was born but lived only a short life dying in 1895 at eight years of age. Another child born in 1890 died that same year.
By 1901 the family was living in Ste. Catherines, Ontario. Charles is now 46, Martha, 42 and the three children, Charles B. 22, Ethel B. 20 and Mabel L. 15. They also had a lodger living with them. The two older children have occupations. Charles B. is a bookkeeper and Ethel is a dressmaker. Charles senior died a year later in April of 1902 in St-Catherines as announced in the “Canadian Champion”, a newspaper from Milton. He was just 47. Sometime after his death Martha would move to Toronto to live with her daughter and her family.
The 1911 census Martha, a widow, is living with her daughter Ethel and her daughter’s husband Frank Burch on College Street in the west end of Toronto.
Martha remains with her daughter and son-in-law in Toronto for at least ten years. She was present with them in the 1921 Census living at 459 Dovercourt Rd. in West Toronto Ward 5. She is 73 years old at that time. Ethel and Frank are childless.
We do know that Martha was alive in 1923 because she attended the jubilee in Acton during the Civic Holiday with her sister Augusta (Mrs. Fred Morrison, as posted in the Acton Free Press August 9th.
I do not know when Martha died as I have yet to find her death notice.
Powered by