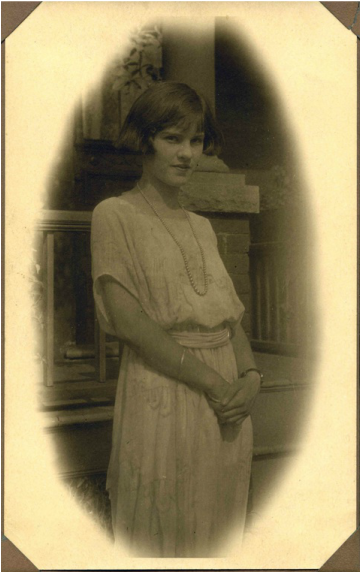 After the death of her mother when she was just two years of age, Lilly went to live with her paternal grandparents and three maiden aunts. This continued for all of her young life. Her maiden Aunt Edith "Edie" was the closest thing to a mother to her and any mother could not have given her more love and devotion than Edie. Living with a strict Grandmother was not always easy and apparently Lilly was a willful child.
I often heard stories of how strict "Gramma McEwan" was and how Edie made things easier. Later in life when Edie lived with us she extended the same kindness when she knew my sister and I were due for a punishment.
When Lilly started high school at Riverdale, she met my father Kelvin Rankin Bell. She and Kelly were immediately attracted to one another, he a pitcher for the high school baseball team and she an attractive young woman.
The couple married December 1, 1926,(1) while visiting one of Lilly's cousins in Niagara Falls. It was an elopement and being afraid to say anything to her maiden aunts who were her guardians, the couple kept the marriage secret for over a year, each returning to their childhood home.
Lilly became pregnant shortly after she told her aunt about her elopement, and in 1928, they had their first child, a boy. They would have three more children, of which two are still living.
​

Kelvin Darcy John Bell  (1928 - 1981)
​        Kelvin Darcy John Bell
Penelope Frances Bell (1942 - 1945)
​        Judith Ann Whittingham born December 26th 1942 was adopted by Kelvin Rankin Bell and Lillian McEwan Bell. on Wednesday the 3rd of May 1945 in the County Court of York His Honour Judge Klein presiding and her name was changed to Penelope Frances Bell. She had been their foster child since infancy. She died just several months later.

Further Family of Kelvin and Lilly

Kelvin Rankin Bell and Lilly McEwan-Bell had two more children. These children are still living.
After the death of her first husband Lilly married Edmund Beynon in 1978. He died ten years later in 1988, in Cobourg, Ontario.
Lilly died in Haliburton, Ontario November 29th, 1998 in her 91st year.
Citations