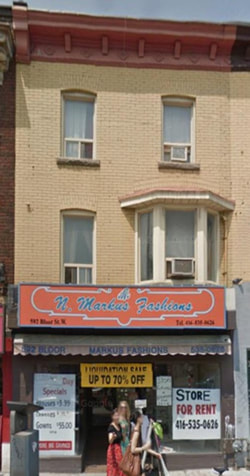 James business was doing well and the family was growing. This was their third girl and forth child.

Only six when she lost her mother she probably saw Frances as the mother figure.

Not only the loss of a mother at a young age but also the constant moves, must have been hard on James' older children.

I know less about this group of girls in the Ryder family than I do Frances Sophia’s biological children. Except for “Billy”, they remain more elusive and I often wonder if they felt less close than the others. Billy was easier to research due to the fact he owned a prosperous hotel in Sarnia.

She married Frederick Morrison, a printer and in 1891 they were living in Toronto, with their four year old son Otto Franklin Morrison, born August 30th 1886. Mary’s half brother Thomas Ryder, a dry-goods clerk, and just seventeen at the time was living with them.

Mary and Fred had another child shortly after, a boy they named Roy, April 25th 1892. They were all living in the east end of Toronto in 1901as per the census.

By 1911 Roy, eighteen is not present with the family but Otto age twenty-four is still living at home.

The 1921 Census shows Mary Augusta as a widow, living with her unmarried son Otto. They reside at 592 Bloor Street West in a house that they own. Otto is in the hardware business. He possibly he got into this business due to his uncle Jack Pollard. Also to note that the house they lived in has a storefront and could quite possibly have been his hardware store. Her other son Roy it would appear has left home and I am unable to locate him.

Mary Augusta Ryder-Morrison died in Toronto on March 18th 1959. She would have been in her ninety-third year.