This is either William's third wife Catherine Coventry or his mother Susannah Dunbar. Any help would be appreciated. 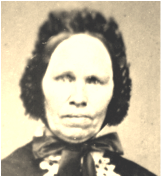 William’s third and last wife was a widow and ten years older than William. She was born Catherine Coventry in Chinguacousy Township, Ontario in 1829, to James Coventry and Elizabeth Doone.(3)

Catherine was living at home in 1851, with her widowed father age sixty-four and five brothers age twenty-two to thirteen and one sister. She was the eldest at the time and she along with her 20 year old sister most likely took care of all the household chores, cooking and cleaning for the family of men.(1)

I found Catherine in the 1861 census living with her widowed father and family.(2) Catherine married George Patton Thompson rather late in life when she was at least 40 years old.(3)
​United Presbyterian Congregations of Brampton & Derry West, Part 1, 1858 - 1879
Thompson, George P., 41, Chinguacousy, Esquesing George & Eliza (Smith) married Coventry, Catherine, 40, Chinguacousy  Chinguacousy  James & Elizabeth (Doone) Witness: James Coventry, Chinguacousy August 25th 1870​
In November of the same year Catherine gave birth to twin boys, George and James. Both babies were weak and died shortly after their birth. George at twenty-six days of age and James at thirty-three days.(4)(5)
​
The 1871 census has Catherine age 42 living with her 85 year old father James. He is listed as a widower and farmer and she is listed as Catherine Thompson and married. I do not know if she was widowed at the time or just stayimg with her father as he was aged. I am unable to find her husband George P. Thompson. Perhaps she and George went separate ways.(6)

The 1881 census comes up empty for both Catherine and George(7) causing me to wonder if after the death of the twins, her husband did not just abandon her. She marries William in 1883.(8)
​04163-83 (Halton) William BELL, 44, Tp. of Toronto, Tp. of Espuesing, farmer, widower, s/o Hugh BELL & Susanna DUNBAR,
married Catherine THOMPSON,50, widow, Tp. of Chinguacousy, Stewartown Esquesing, d/o James COVENTRY & Elizabeth DROAN, (Doone)
​witn: Elizabeth J. COVENTRY and George N.ATCHISON both of Stewartown, 12 Dec 1883 at Stewartown Esquesing.
​The 1891 Census has Catherine with William, his three boys and Ada and Lizzie Coventry living with them.​(9)

Catherine and William raised Will's boys in a house on Church Street, in Georgetown. By 1901 the census shows only Robert John and Ada who remained.(10)​  It would appear that Ada was a niece of Catherine's. Ada remained with them all during their marriage.
After Catherine died and William moved to Toronto with his middle son John, Ada remained in the house for many years, which leads me to believe the house may have belonged to Catherine and not William. Ada is found in later documents to be living at 30 Church Street, Georgetown. I have a picture of my father in front of his grandparents house in Georgetown and the house resembles the Church Street house in Georgetown today.
Catherine would remain married to William for the rest of her life.
When William died several years later he was buried along side her.
Bell, William, Mrs., Death notice , appeared in Canadian Champion, 23 Nov 1916 , page 3 , column 5
Died In Georgetown on Wednesday November 8th 1916 Catharine Coventry, Beloved wife of William Bell in her 88th year.  The funeral will take placefrom her late residence Church Street on Saturday at 2:30 pm.  Interment in Greenwood Cemetery, Georgetown.
Citations