Mary Brown was born in 1809,(1) daughter of Irish stock. Like the McEwans they must have emigrated to Glasgow during the industrial revolution. The Irish that moved to Glasgow and lived in the Tradeston area of the city like most immigrants, stayed with their brothers from Ireland creating a ghetto of Irish. Most of these people were working poor and lived in miserable conditions.
​​           Mary would become the wife of William McEwan as mentioned in William's biography, 16th of April 1836, Tradeston, Gorbals, Lanark County, Scotland.(2) You can view part of the document on that page.
​​           I have little information on Mary. Unable so far to find her parents and siblings except for those mentioned on the 1841 census for Glasgow, Scotland.(3) On some document I found her name as Mary Ann, not just Mary on some documents.
​​​           Mary and William had one child and named him John. If she had not miscarried before then traditionally this should be the name of William's father. Since she had only one that would be my assumption. John was born in 1841, four years after their marriage.
​​           While they lived in Scotland Mary would have been pregnant with John. Did they decide a life in Tradeston was not the life they envisioned for their child, that is hard to say. Perhaps they looked as Canada as a new beginning and hopefully a better life. I wonder if she made the journey from Scotland to Canada while pregnant, or with a newborn in her arms. Another unanswered question. I also wonder who was the John McEwan age 12 in the 1841 census for Glasgow and what became of him. Did he die and they named the child in his honour? So many unanswered questions for which I seek answers. Hopefully I will find a few.
Mary appears to have immigrated sometime sometime after the birth of John in November of 1841 as William is present in the 1847 Toronto Directory. The 1851 census for Toronto has not survived. She can be found in the 1861 and 1871 censuses living in Toronto with her family.(4)(5) Neither she nor William are present in the 1881 census or have yet to be found. 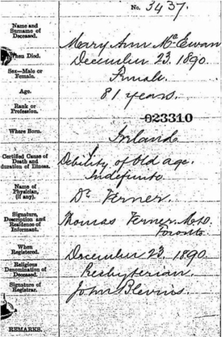 ​​          Mary Ann McEwan, widow since three years, died in Toronto, Ontario, December 23rd, 1890, of old age at eighty-one. She was buried the following day in the Necroposlis Cemetery, Toronto, Canada, Sec 1 Lot 153 next to her husband William.