​            Gideon Turner Ostrom was the third son in the family of ten, of Simeon Wellington Ostrom and Lucinda Frederick.
According to my records Gideon (sometimes referred to a Turner) was born January 7th, 1831 in Sydney Township, Hastings, Ontario.
​            Gideon appears in the 1851 census as "Turner Oston" with his father Simeon, brothers Henry 24, J.M. 14, George 9, and sister Elura 7. The two elder boys are listed like their father as farmers, while J.M. is a farm labourer.
Gideon married Emma Turner, October 14th, 1858 in Whitby, Ontario. His name for this record was Gideon Onstrom.
Try as I might I have had much difficulty with my line of the Ostroms. The name has been misspelled so many times and in so many ways. I am unable to locate Gideon Turner until 1871 where he turns up in the census as T. Gedion Ostrom, living in Peterboro County, Otonabee Township with his wife Emma and eight children. At this point he is listed as a labourer and his faith is Wesleyan Methodist.
The 1881 census has him living in Alnwick, Northumberland West, Ontario with Emma and eleven children. His eldest children Margaret Ellen and Simeon have left home and married by this time. It is interesting to see that he lists himself and the children as of German descent, while in fact the Ostroms were Dutch.
The 1891 census pg 6., Gideon is documented as (Gidson Ostrom), a widower at 60 remaining in Alnwick with seven children still living at home, the youngest who was just six years old. In this census he identifies himself as born in Ontario as are the remaining children. His religion is Calvinist Presbyterian, while the children identify themselves as Methodist.
Their farm would have been situated in Alnwick Township not far from  the village of Roseneath. No matter how hard I try I am unable to locate the farmstead. Possibly Gideon never owned land of his own but was rather a tennant farmer for one of the owners in Alnwick. 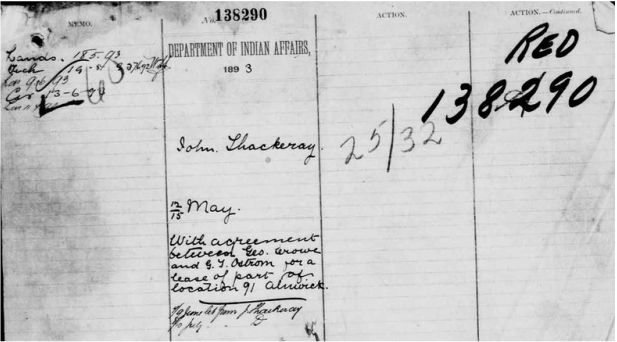 Document cover from the Canadian Government

Land Branon From the department of Indian Affairs

I was fortunate to come across the 1893 correspondence regarding the proposed leasing of land nearby. The land itself was on the Indian reserve so he never would have owned it, and having lived there for many years he would have already had a residence in the vicinity. One wonders why at age 62 he would want to clear more land and build a house.
These documents were dated in the spring of 1893 and signed by John Thackeray, who at the time was the Indian agent and Justice for the area. Gideon would lease 16 acres of land belonging to George Crowe for a period of five year
This particular plot of land had stipulations for the lessee as follows: 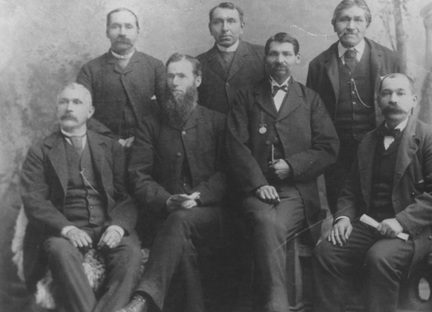 In back from left to right, Tom Marsden, Councillor, born circa 1817, died 1916 in Alderville. Peter Crowe, Councillor, in the centre back, born 1835 Grape Island, died in Alderville 1920. Back right, Francis Beaver, Councillor.
Front left George Blaker (the first, the Reverend), Councillor. Next to him John Thackery, Indian Agent, next to him Chief Mitchell Chubb, right front William Loukes, Secretary
​            Unfortunately the government took too long to decide on the agreement and in the end wanted Gideon Ostrom to pay the entire lease up front, which caused the said agreement to be annulled.
This document would however indicate approximately where Gideon and his family lived. He would not have wanted to lease land far from his own farm.
The 1901 census has Gideon Ostrom, (Gid Ostrem), now 70 years of age listed as a domestic, widower, living with his son, William aged 20 also working as a domestic for the Wilfred Valleau family in Northumberland County, Township of Percy. There were several Valleau families living in Percy and also Brighton, which leads me to believe he was living not far from the village of Codrington.
Gideon Turner Ostrom died on December 5th 1902 just short of his seventy first birthday. He died in Brighton, Ontario and was buried in the Centennary graveyard alongside his wife Emma.
The full government land lease document can be found here: ALNWICK AGENCY - CORRESPONDENCE REGARDING THE PROPOSED LEASING TO G.T. OSTROM OF LOCATION 91, ALNWICK RESERVE.
This was posted January 10, 2016 accompanying a blog on the Alderville Indian Reserve published the same day.
Powered by