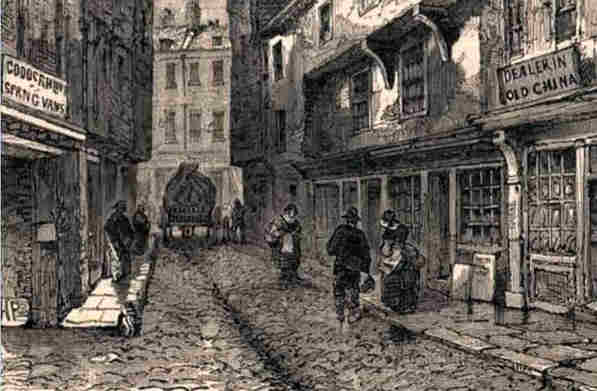 Robert Hugh Bolt, according to my research, so far was the son of Robert Bolt and Charlotte Dyer. Born in 7 Nov 1821, St Davids, Exeter, Devon, England​ the family relocated to Castle Street, Exeter, Devon, England where he was baptized December 30 1821.
Also according to my records, he was the second eldest son in a family of four boys and two girls.
When he married Elizabeth Ridley,  June 16 1845, at the Old Church, Saint Pancras, London, England, he was documented as a shoemaker. The next information I was able to find was an 1848 document of the family living at 56 Pear Tree court, where Robert Hugh is listed as a shoe and boot maker. living
Several years later in the 1851 census. By this time Robert age 29 and Elizabeth 32, have Robert 4, John Thomas 3, and Charlotte 1. They also have Robert’s brother William 19 and another young man 17 both employed by Robert as apprentices. He is listed as as shoemaker master, employing two apprentices. 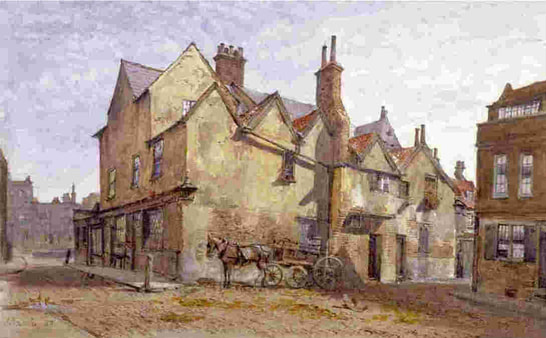 Corner of Pear Tree Court and Clerkenwell Close
It should be noted that the area where they lived was in Clerkenwell an impoverished little quarter of London, atop the Valley of the River Fleet. It was one of the most crime ridden districts of London during these times and is often described in detail by Dickens. A project in the 1860’s began to address the slum area and improve the situations. Many of the buildings in the area were destroyed including the residence of the Bolt’s, declared as unfit for living. Some still remain.
According to a walking tour of the area an American philanthropist George Peabody established the trust in 1862, "to ameliorate the condition of the poor and needy of this great metropolis and to promote their comfort and happiness.”
These streets are renowned for their appearance in many of Dickens novels. Pear Tree Court in particular was a “narrow court” where Oliver Twist and Charley Bates made their emergence onto Clerkenwell Green.
The street runs into Farringdon Lane where lies a pub named for David Copperfield’s aunt.
So while the area where John Thomas grew up was less than ideal, it would seem he like his father developed a good work ethic and strived for better.
The home on Pear Tree Court was demolished in the early 1860’s and the family was forced to move. The record for 1865 locates the family at 68 Old Street in St-Lukes, a five minute carriage ride from their previous address.
Robert Hugh died  April 5 1868, in Islington, Middlesex, England, at the age of forty-six, leaving a wife and three children under the age of sixteen.

After the death of his father Joseph Thomas decided there could be a better life for him far from his original roots. In 1972 he married Catherine Selina Pedder born April 1848 Islington, Middlesex, England, daughter of bookseller, William and Louise Pedder.
The couple left England shortly after their marriage en route for the United States. I have information the the first two of their children, William Robert and Lillian Ellen were born in New York City, however I have no proof of their birth. I do, however have proof of their arrival in Montréal, Québec. I found a listing for Joseph in a Montréal directory for 1878 which proves they were living there and he already had a jewelry business. They appear in the census for 1881 and were living in the St Lawrence Ward, Montreal City, Quebec, Canada.
Life for Joseph and Catherine would prove difficult. Although they had a successful jewelry business, they were less fortunate with family.
They had eight children in total but lost half of them long before they should have.
Following are the children of Joseph Thomas Bold and Catherine Selina Pedder, with their birth and deaths and any bits of information I have found.

William Robert Bolt(1873–1889)  twin of Lillian Ellen
Lillian Ellen Bolt(1873–1901)  twin of William Robert
George Henry Bolt(1875–1900)  George died while serving the country in South Africa, in Naawpoori Hospital from enteric fever.
Alfred Hugh Bolt(1877–1930)   Alfred has also been somewhat elusive regarding his birth record. I have used other documents to confirm this. He married Charlotte Prowse Matthews in 1912. He also enlisted in the 3rd Battalion, Victoria Rifles in 1896, prior to his marriage.
Charles Edgar Bolt(1879–1968)   There is quite a discrepancy regarding Charles. I had a date of 1879, (according to 1991 Canadian Census), for his birth but have since found a baptismal certificate that puts his birth at 1890. His attestation document for the service in the Army also date him as 1879. Did the first die and another child was born and given his name? He married Gertrude Elsie Pratt in 1905, after having already served in the military for three years with the Third Victorian Rifles. When he left to serve in 1916. Perhaps there is another reason he was only baptised ten years after his birth and his actual birth was 1879. for the time being I will leave the birth at 1879.
Catherine Isabel "Katie" Bolt(1882–1905) I am unable to find Catherine’s birth record. According to another Ancestry member she died from tuberculosis, shortly before she was to be married to Robert Sullivan. I can vet her death however through the Drouin Collection. According to a family postcard she was most likely interned at “Place d’été”, the Sanitarium in Ste-Agathe-des-Monts.
Gertrude E Bolt(1885–1986)  Gertrude never married and moved to Toronto. She is buried in the Mount Pleasant Cemetery in Toronto.
Percival Joseph Bolt(1890–1968)  Percy was my connection to the Bolt’s. He married Helen “Nell” McEwan in Toronto and they had one child Donna Eileen (1925-2007). Percy met Nell in Toronto where he was working as a watchmaker. After they married they moved to Brighton, Ontario. Helen died in 1967 and Percy one year later. Both are buried in the Brighton Cemetery.

*Feel free to upload the Bolt family file with citations. Please tell your family about Talespin

I will be doing another piece shortly about The J.T. Jewelry Ltd.