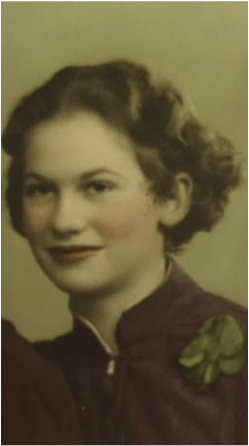 Bernice as a young woman

Bernice was the youngest of Benjamin McEwan and Olive Clement's children. Unfortunately, little is known about Bernice but we are learning more as time passes. Bernice McEwan was born 6 July 1922, Toronto. Baptized on 18 July 1924 at Queen Street East Presbyterian Church, Toronto.

She married George Shadoff, a butcher in Toronto. George was the son of Constantine Shadoff and Mary Evanoff. Through the help of a friend I was able to find several bits of information about Bernice and her family.

The 1940 voters list has Ben and Olive along with her brother Ken and his wife living nearby. The Shadoff family lists George, John, Constantine, Mary, Gladys, and Miss E.

In the 1949 Greenwood voters' list Bernice was living with her husband George on Dufferin Street in North York. By 1963 George is listed as a Grocery manager and Bernice a cashier. They were living on Black Creek Boulevard.

The final listing I have on voters' lists is the 1965 voters' list. They are living in the same place, but young George is now on the list as a doctor, Bernice as a nurse and George as an accountant.

Young George, their son became a dentist and that he died in 2002, leaving a wife and children. His father had died previous to his death. It is possible that Bernice is still alive.


​*Thanks again to Karen for added information.
Powered by