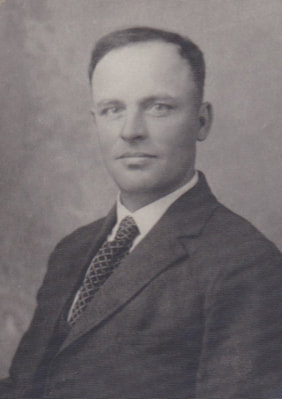 Simon D. Ostrom was the third child of five born to Simeon Charles Ostrom and Frances Knight and the only boy. I know little about Sim, but as time goes on I get little glimpses of his life. He was born September 11 1884, (1) Hope Township, Durham, Ontario.
In 1891,(2) he was in Toronto East with his mother, siblings, and grandparents but has been omitted from the census. It is hard to believe he was elsewhere due to his age. Then, in 1901,(3) he can be found living with his mother and working as a tinsmith in Toronto's east end.
I do know that he moved out west with his mother to homestead several years before the death of his older sister Frances in Toronto, and according to a book written by homesteaders of the Orillia District, they settled there. The book mentions that they first went to Drinkwater where Frances older brother John was and then moving further west to where her brother Harry lived.(4) They bought land near Cantuar, Saskatchewan and this is where he remained with his mother.(5) A few years later after the death of his sister her two children were sent to live with their maternal grandmother. The family is present on the 1916,(6) census and Simeon is identified as the head of the family with Frances and the two children Frances and Edgar McEwan. Sim and his mother both had a quarter of land and lived together until he married. At that point Frances had a small house built on her quarter.
Sim met a girl Annie Vickers, originally from Ontario and married her sometime after 1916. They had a girl by the name of Geraldine and in 1921,(7) Sim, Annie, Geraldine and Frances lived in Cantuar, Saskatchewan on the homestead. Frances McEwan and her brother Edward were not present.
Sometime after the 1926 Census for Saskatchean, Sim and his family moved further east. Their marriage did not survive. I have been told that Geraldine had a wonderful singing voice and sang on the radio in one of the larger western cities (possibly Calgary). According to the Book about Success, Geraldine died at a young age at which point Sim and Annie moved back to Ontario. This would have been just prior to their marriage break-up.
They lived near or in Courtright, Ontario at which but Sim moved to the Detroit to find work, near his nephew Edgar McEwan. (See immigration papers below)
Some interesting facts on the immigration papers. Sim was 5'6" with brown hair and blue eyes. His wife Mary Ann was living in Courtright at the time. The divorce papers were signed in February of 1927.
Further investigation regarding Sim appears to show he did not remain in the United States but returned to Calgary at some point. I have found his death in Calgary September 19 1930. Whether he worked in Detroit or not I do not know. Perhaps when the divorce became final he moved back with his aging mother. He is buried in Burnsland Cemetery, in Calgary, Alberta. Sim was only forty-six when he died(9).
Funeral services for Simeon Ostrom, 46 years of age, who died Friday in a local hospital, will be held Monday morning at 10:30 o'clock from Foster & Foster's funeral home, Rev. M. Hall officiating. Interment will be made in the Burnsland cemetery.
Mr. Ostrom was born in Port Hope, Ontario, and had been a resident of Calgary for one year. He leaves his wife and a daughter, Geraldine; his mother, Mrs. Frances Ostrom, of Swift Current, and two sisters, Mrs. J. Metford, of Pennant, Sask., and Mrs. J. Clark, of Cabrai [sic], Sask.
The Calgary Herald, September 20, 1930, page 10
Alberta Death Reg. #202-572

Sim like many other of the Ostrom men was not always truthful about his age. In the 1926 census he lists himself as thirty-six years of age. Four years younger than his forty.

More information to be investigated

My Ostrom distant cousin Bill Smith has filled me in on a few Ostrom facts. If I ever get into the rest of the family he has given me a truckload of info.
With regard to Simeon D. he told me that Geraldine is actually buried in Woodland Cemetery in London, Ontario, as is her mother Annie Vickers. This would lead me to believe that Geraldine died in Ontario not out West as previously thought
Annie was born most likely in Kirkton, Perth, Ontario in 1898 daughter of Harvey Vickers and Margaret Hanna. Her marriage to Sim was more than likely in Saskatchewan around 1918. The fact that Geraldine had a wonderful singing voice and lived near the famous tenor Jon Vickers has me on a search to see if there was a relationship. (i.e. cousins)
Citations