During the past year (2019) I have come across new information about my McEwan family. I believe I have found the actual baptismal information on William McEwan. Until now I did not know who his parents were and any information I found was erroneous. I have found more concrete information that actually works regarding his actual age.
I always knew from family information that William was born in Ireland (of Scottish decent). For a time I thought his father was William but my new find identifies his father as John. This would prove more in keeping with the naming tradition of the Scots and Irish. If William’s first son is named John, then it is usual to assume that was the name of his father, which appears to be the case.

​I found (a) William (McKeown) born November 8 1811 in Aghalee, Antrim, Northern Ireland to John McKeown and Eliza (unknown).(1) According to further research it would appear he had a brother Joseph born July 2 1815 in the same parish. This would indicate that Eliza’s father was probably named Joseph if they used the naming pattern of either the Scots or Irish. I am unaware at this time of any other children. The family are Protestant and frequent the Presbyterian Church. As Irish documentation is hard to come by this is the only clue I have for the birth of possibly our William. We were told by family that John McEwan son of William McEwen and Mary Brown was a Scot of Irish descent. This is the closest I have come so far to verifying any parents to my 2nd great grandfather William. More research and proof is needed.
At some point he or the family moved back to Scotland. It is here that he married Mary Ann Brown April 16 1836, in Tradestown, Gorbals, Lanark, Scotland.(2) The spelling of McEwen is what shows on the marriage certificate. When it would have changed from McKeown is unknown. It would later change again to McEwan.
Tradeston was an industrial part of Scotland where rich and poor lived side by side. The north eastern part housed the poor, while the wealthy inhabited the south and the west. My ancestor was more than likely from the former.
Family lore from an ancestor long passed tells tales of the two: "William McEwan was the youngest of 21 sons and Mary Ann Brown was youngest of 19 daughters".  While most likely much exaggerated, it indicates the couple both must have come from large families. Unfortunately, I have no proof of this yet. The same relative claimed that he was a direct descendant of Bryan Barou, the last king of Ireland. So far I am centuries away from proving that. It does make for a good story however.

I was however lucky enough to find the family in the 1841 Scottish census with my forbearers among those taken.(3) I was not sure how to read it and wondered who all the people were. For this reason I was compelled to read about the conditions in Glasgow during those years to fully understand how dire the conditions might have been. There are what appears to be three families under the same roof on Main Street
William is documented as a handloom weaver in the cotton industry as are the other men in the household. Mary, Elizabeth and the two children are unemployed and Barbra is a seamstress. I am thinking the others in the household would probably be part of Mary's family, possibly two sisters and a brother, and their families. This would quell the family tale about William and Mary’s families. I am uncertain who the child John McEwan is as he is too old to be William's son. Perhaps he is a young nephew.
The family is living in the Parish of Kirkfield "quoad sacra" (this was an ecclesiastical census designation), Gorbals, Lanarkshire, on Main Street. Gorbals was an overcrowded part of Glasgow and conditions were less than hospitable. There was a lack of food and lodging and the overcrowding lead to extremely poor living conditions. *blog post below 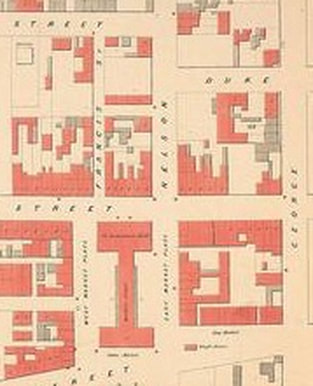 ​William McEwen always lived near the centre of Toronto. This map shows the St. Lawrence Market (lower centre) and both Francis and Duke Streets to the north of the market.

​​          William and Mary and infant son John would soon leave Scotland and immigrate to Canada. Until this morning I was less certain of the date, but an 1842 Canadian Census for Wm. McKeon leads me to believe I have found the family. This would mean they left Glasgow during the year 1841 to settle in Toronto. In this census it appears that William is listed as a blacksmith. It is possible he learned this work as his only son John would become a goldsmith, therefore applying his father's trade to one more refined. Possibly in hopes of a better future.
​​          William would live his life as a labourer and remain among the working poor hoping for a better future for his one young son. Those dreams would have been accomplished had his son John, my great-grandfather not been so prolific. John would have had much more money to spend without thirteen children. But then again, if he had I would not be here as my grandfather Benjamin was one of his youngest children.
Unfortunately the 1851 Canada West census for Toronto did not survive so I am unable to find the family there. The earliest presence of the family is in the 1847 Toronto Directory where William is working as a labourer and living with his family on Francis Street.(4) Francis Street was a short street running perpendicular and starting at King Street just north of the St. Lawrence Market in the heart of the city and ending at Adelaide. Even at that time it must have been a bustling area filled with tradesmen and labourers from abroad. The total revenue for the city that year was £10475 according to the city directory. He is also present in the 1861 and 1863 Toronto directories,(5)(6) the latter at 127 Duke Street. Duke Street is only a block east running perpendicular to Francis.
William remained in the same area for the rest of his life and worked as a labourer. He can be found in the censuses for 1861 and 1871.(7)(8)

​​          William died in Toronto August 19th 1887. He was documented as seventy-five years old and having been born in Ireland. His grave stone says he was born in 1810.
​​          If he had remained in Scotland would he have had such a long life? The life expectancy in Glasgow was much lower. William died from cholera. Toronto was a city not unlike Glasgow at the time and the water supply was less than pristine, especially in the downtown core where the family resided. He left behind his wife Mary, son John and ten grandchildren. The youngest of his grandchildren, Edward died two days prior to his death also from cholera.
​​          He did live to see many of his grandchildren grow, each choosing a trade or profession that would promise them a brighter future. I am sure this gave him solace. William is buried in the Necropolis Cemetery, Toronto, Ontario.
for a greater insight visit my blog on: THE PLIGHT OF THE IRISH - GLASGOW SCOTLAND EARLY 1800'S
9/17/2016 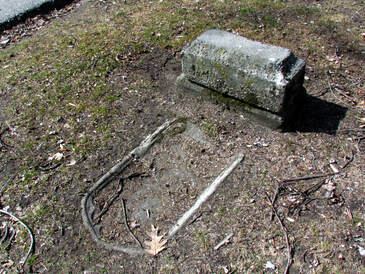