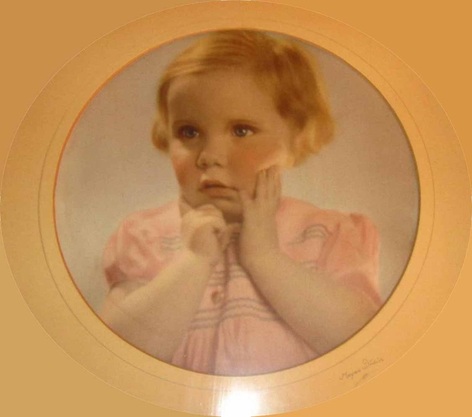 Pene just shortly before her death

​​         Judith Ann Whittingham, born December 26th 1942 was just an infant when my parents brought her home. For whatever the circumstances, her mother, a young unmarried girl was not in a position to keep her. 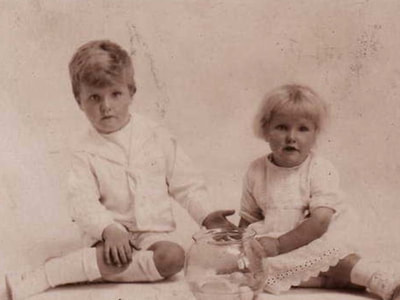 Thomas and Lena circa 1925
Lena Mary Whittingham (1923-1992)(4)(7)(8) was the daughter of Frederick Leonard Whittingham (1888-1925)(1)(3)(5)  and Mary Angelina Staines (1893-1936)(2)(3)(6) both born in England. Frederick died in England in 1925 and Angelina moved to Ontario nearby some members of his family. Lena had a Thomas two years her senior. Once in Ontario her mother seemingly remarried although I have yet to find her marriage to Melvin Edward Hitchcock. In 1933 she had another child Jean Florence Hitchock (1933-1990)(10). Angelina Whittinham died in 1936 as a result of septic peritonitis caused by chronic salpingitis (inflammation of the fallopian tubes, caused by bacterial infection). She was pregnant at the time.
After her death the two children from her first marriage were separated and taken in by two of her first husband's siblings. Thomas was adopted by one of Frederick's sister's and her husband and Lena was taken in by one of his brothers. She was never adopted. I am unaware what happened to the half sister but she possibly stayed with her biological father. It appears she never married. She died in Simcoe, Norfolk, Ontario in 1990, 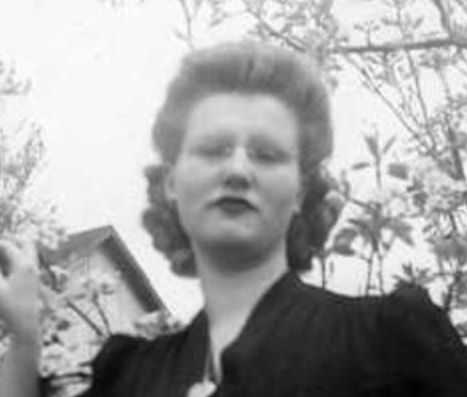 ​         Lena worked appears to have worked in Toronto but in 1942 she became pregnant with the child she would name Judith Anne. I can again only surmise what happened when, unmarried, she became pregnant. Because my parents went through an agency, I would think that she went to one of the maternity homes, popular at the time in cities all over. One such as as Vincent House run by the United Church of which my parents were members comes to mind.
Something that niggles at me was the fact that Lena named the child. Did she have hopes of keeping the little girl? Was she waiting for the return of a soldier she hoped to marry? Questions that will remain unanswered.
I do know that Lena did marry in 1944 to James Dranitsaris (1922-1981)(7)(8). They would have five children during their marriage.
​         Kelvin and Lillian Bell (my parents) had been seeking to adopt a child for some time and when they saw her she became their "chosen child". "It is not easy to make the decision to adopt, let alone find the child that is right for you." These were my mother's words. She said that they had seen many infants but once they saw this child they knew it felt right.
Back in the 1940’s the process of adopting a child was not as difficult as it is today and the baby came home with my parents shortly after her birth. They were able to take the baby home almost immediately in what would be considered foster care today. Unwed mothers were discouraged in keeping their babies, unlike today where they are encouraged to keep them. In those times my parnets applied for the adoption and once the baby was chosen they brought her home. they named her Penelope Frances Bell.
It would be not until May 3 1945(11) that the adoption would be final. At this point her new name became legal. This period of waiting was difficult for the couple and again, I do not know all the circumstances but perhaps Lena had not completely made up her mind to let go of the child. From the way maternity houses worked at the time this is not likely. It is more plausible that it was just the normal time it took to finalise the adoption.
Once the adoption was final her new parents took her to Mayers Studios, a professional photography studio in Toronto and had her photographed as a celebration of the joyous occasion. Most of the photographs are black and white but there was one that was colourized. If I remember correctly The studio gave this photo to my parents as a momentum of their child after her tragic death.
Those pictures were taken in early May. By July she would be gone.

* I am presently working on a piece about Pene and adoptions in the 1940's.
Toronto Telegram July 7th 1945

Child Reaching Into Pond For Goldfish Was Drowned In 18 Inches Of Water
“Penelope Bell, aged two and a half, of 32 Wolverton ave, was drowned yesterday afternoon when she fell into a goldfish pond in the garden of a Warland ave. home, in East York.
Two years ago a two-year-old boy was drowned in a six-inch-deep lily pond in Don Woods drive in York Mills, while playing around a neighbor’s pool.
The girl, daughter of Mr. and Mrs. K. R. Bell, had been put out in her yard to play shortly after 1 p.m. by her mother. In some manner she got out and wandered to the rear of the Warland ave. address, where the small pond contains three goldfish.
It is believed that the child was leaning over the edge of the pond attempting to pick up one of the shiny fish when she lost her balance. She fell face downward and drown in 18 inches of water.
When Mrs Bell discovered her child missing she started searching the neighborhood, and it was the mother who found her baby in the fish pond. She was rushed to the Toronto East General Hospital, but she was pronounced dead on arrival.

Coroner W. J. O’Hara has announced that no inquest will be held.
“It is one of the most tragic accidents in the history of the township,” said the coroner. “It is the first of its kind that I know of.””
My parent’s dear friend Ken Samis wrote a poem in her honour.
TO PENE

To good for this world was our Pene bright,
Too sweet to be here for long;
She came for awhile and our hearts were light,
Her laughter was sweet as a song.

She smiled – and our hearts were opened wide,
She beckoned and all drew near;
Her life was all cheer and she seldom cried,
Her eyes were not wide with fear.