This is a picture of the Richard Knight family taken around 1870. Back row: Hannah, Elizabeth, William May, Mary Knight-Bland, Frances Knight-Ostrom, Richard (father), Catherine "Kate" Knight-Timllin, Richard, Frances May-Knight, John, and Emma. Elizabeth and Hannah were from Richard's first marriage to Elizabeth Phillips. Richard's sons John P. and William H. are absent from the photo. Not yet born are Henry, Jane and Benjamin 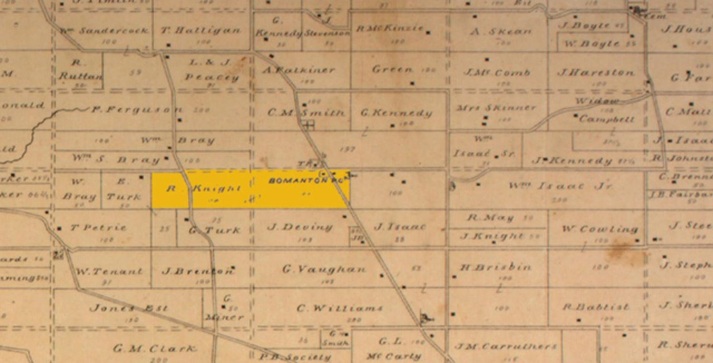 ​
Richard Knight was born December 28 1823 in Saint Minver, Cornwall, England. (1) This date would prove possible but not definitive when we refer to the Ontario Census regarding his age.
If this is the case his parents were John Knight and Mary Miller. It is then possible he  had at least one brother ten years his senior Henry born in 1816.
​Bodmin is just a short distance from Saint Minver where I found the marriage registration. This was the town where the marriage registrations and Census registrations took place.
Next I found a registry for a marriage between Richard Knight and Elizabeth Phillips in the town of Bodmin, Cornwall. I just recently found a more complete parish registry with the date for their marriage, 24 November 1846.(2) This is most certainly them. In this marriage I have their place of residence as Port Quin, Cornwall and were married in Saint Endellion. The names of both father of the bride and groom are identified as John. Richard's profession is tailor. It would appear they married just before migrating to Canada. 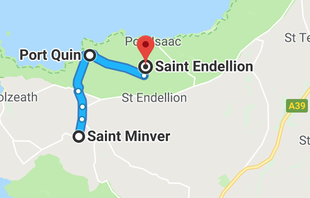 The distance between Port Quin and Saint Endellion is only fifteen minutes by bicycle, which, would be the same for a horse and wagon.

​
1846 Cornwall Parish Register
for Richard and Elizabeth
​            Richard was living in Vaughan, York region in 1851,(3) working as a tailor with wife Elizabeth and 4 children. They also had a servant in the house named Hariott Bone, a 12 year old from England. They actually lived in York County, Vaughan Township.
Richard Knight a native of England settled in Bowmanton, Township of Haldimand, Northumberland County in the year 1852.(4) It does not say if Elizabeth was alive at the time or not. The 1851 Census information was not gathered until after January of 1852 and at that time Richard was still in Vaughan with his family. It would not be unreasonable to think that he only moved to Bowmanton in the spring of that yea. He was able to secure 200 acres in Northumberland and it is possible they decided to move to the area before the death of Elizabeth.

Gazetteer and Business Directory for the United Counties of Northumberland and Durham 1865-6
He met Fanney May after settling in Bowmanton and married her, November 1 1853.(5) It was after he married Fanny that he became the Postmaster of the Bowmanton Post Office and also farmed and ran a grocery store. He continued as postmaster between the dates 1860-05-01 to 1884-01-05 at which time he handed in his resignation.(6)
​The family moved to Toronto sometime between the 1881 and 1891 census'. They lived in the east end of what is now downtown Toronto. Richard appears in the 1891 Canadian census with his wife Fanney, five of his children and four grandchildren, but died the following year. He died 25 September 1892 and is buried in Bowmanton Cemetery Haldimand, Northumberland, Ontario, Canada.
​​I also found an obituary for a Richard Knight as follows: ​​Knight Richard James 16 Nov 1894 Port Hope 25, Weekly Guide 23 Nov 1894 05/06 Bn England. Died of brain fever. Could this be the same Richard but the date is wrong?
Richard had a family of two boys and two girls with his first wife Elizabeth Phillips. John, Elizabeth, Anne and William. For more on Elizabeth and their children visit Elizabeth Philips page through the link.
Richard's second wife Fanney May and their twelve children William, Mary, Frances, Ann, Richard, Eliza, Catherine, John, Emma, Henry, Sarah and Benjamin
Citations