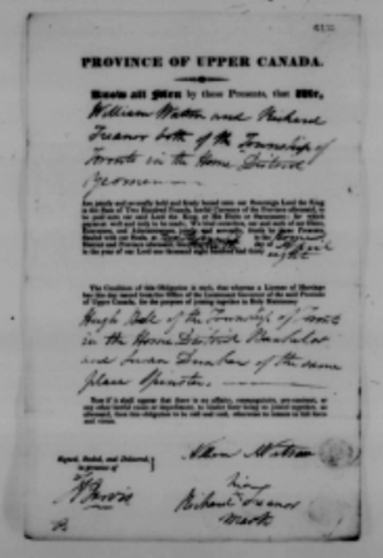 Hugh Bell born in Ireland appears to be the only living son of William Bell and Flora(1,2). Through recent research I believe I have found the correct Hugh.
The 1821 census for Fermanagh County, Derryvullan Parish, in the northern part of Ireland lists the following for residents at 8  Drumbulkin Street:  William, Flora and Hugh. They are the ages of my Bell family and there are other similarities. I always was told they came from Armagh. Hugh and his parents emigrated to Canada before the next census in Ireland.
Hugh married Susannah Dunbar, most likely an Ulster Scot like himself. They married  in Hornby, Ontario May 20th 1830,(3) (more likely should read 1836 or 1838) and began raising their family of seven children. (There is possibly a seventh but she is unproven and no documentation can be found).
The 1842 Census has the family living on what would have been William's property and farming it as he had for the 10 years prior to the census. William died several years prior but their are nine living on the farm when the census was taken. I would have thought that Flora would have lived with the family but it does not appear so. I do not see anyone over 45 who is single or widowed.
Unfortunately only the 1851 agricultural census is available so do not the family until the 1861(4), census for Peel County Toronto Township. At that time the family of five was living in a one-story log house with another child. That child was five year old Susanna Beaty. I believe her to be their grandchild and daughter of Matilda, who had recently been widowed and left with four young children.
There are other Bell's in the area and while not proven it is quite possible that these would be cousins of Hugh. One in particular is Robert Bell. The will of Hugh's father left his land to Robert Bell and Hugh Bell. The east half to Robert and the left to Hugh. Hugh is also mentioned in the will as the eldest son of William and since the only Robert the only land owner nearby is seventy-one he could not be a son.
​The will is dated in March of 1839, but Hugh's portion of his father's petition was only granted and fulfilled on April 12 1851. Another transaction on John Beatty's original land grant, Conc. 3 Lot 11 WHS was made between Samuel Beaty and Hugh Bell on October 28 1854.
​Samuel Beaty was the husband of Hugh's eldest daughter Matilda. This lot was bought while Samuel was alive but he died before 1861, leaving Hugh's daughter a widow with four children. Samuel was a sawyer and in all likelyhood it would have been Hugh who farmed the land.
​           ​​January 28th 1856, Hugh purchased yet another lot (SE ½ Lot Conc.1) from David Wiggins. This would have given him a fair chunk of land to farm as a market farmer.
The property where they lived was described as Concession 2W lot 11 consisting of 100 acres, 55 of which was under cultivation.  The other 45 acres was describes as either wooded or wild. The cash value of the farm and it chattels was valued at $5100.
Today Hugh’s lot would correspond to the North East corner of Old Derry Road and Second Line West in Mississauga. Most of it is a housing subdivision called Gooderham Estates, however the Gooderham house built in the 1870s was restored and is the Rotherglen School.
1861 Agricultural census for Peel District, Toronto Sub-District (Ontario)
Hugh Bell's Crops were as follows: